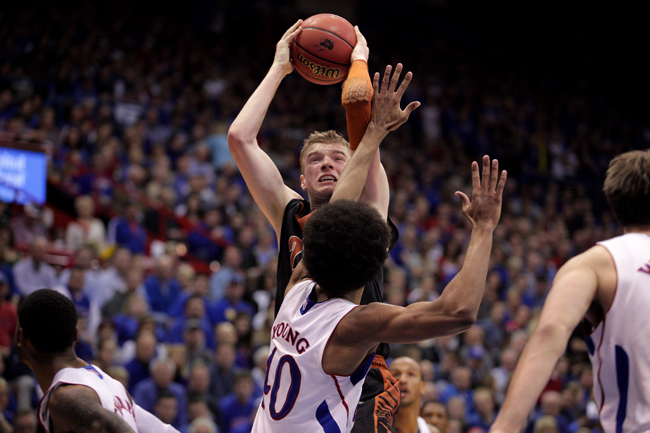 Forward Connor Lammert goes up for a shot in the second half. Lammer finished 3-8 for 9 points and 5 rebounds.

LAWRENCE, Kan. — A pregame reading of the noise level at Phog Allen Fieldhouse showed that the raucous crowd of 16,300 registered at 117 decibels.

In their last meeting with Kansas, Texas lost by just five points, 64-59, on Jan. 19 in a game it led by six points with less than six minutes to play. But the Longhorns, whose roster includes six freshmen, did not respond well to facing the Jayhawks away from home as Texas fell to Kansas, 73-47, on Saturday night.

“We went up to Michigan State earlier in the year and we got a little taste of what it would be like,” freshman forward Connor Lammert said. “After a while, we kind of got used to it. At the end of the day, it definitely came down to the 10 guys on the court. We didn’t shoot the ball particularly well at all. We got some shots we were looking for. As far as the fans go, they were great. It just came down to us.”

Texas fell to the Michigan State, 67-56, at the Spartans’ Breslin Center, which is considered one of college basketball’s best gameday atmospheres. But it pales in comparison to the intensity and hostility that comes with playing at Allen Fieldhouse. With the win, Kansas has now won 104 of its last 106 games at home.

“It’s different playing at home,” freshman forward Ioannis Papapetrou said. “They came to our place and played a really good game for about 36 minutes. The last four minutes of the game, we basically gave the game away. That wasn’t the case today. The place was packed. They’re playing for the fans. They executed more and outplayed us. It really came down to execution and they were better.”

Allen Fieldhouse may have been at its loudest long after the outcome of the game had been decided. With Kansas leading Texas, 66-34, Jeff Withey stole the ball from Myck Kabongo and passed it head to Ben McLemore, who had a clear path to the basket with no defenders nearby.

McLemore came at the basket from an angle, stutter stepped and leaped into the air, spinning 360 degrees before bringing the house down with what was the most impressive play of the game.