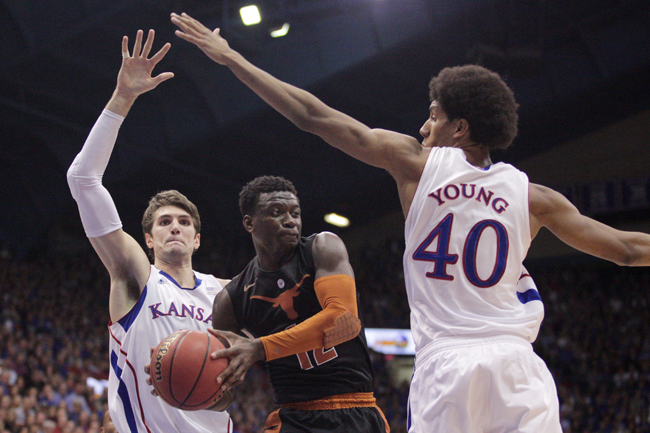 Texas has had plenty of poor shooting nights this season and has gotten off to many sluggish starts.

But the Longhorns turned in one of the worst 20 minutes of the season Saturday, going into the locker room at Phog Allen Fieldhouse trailing the Jayhawks, 28-15, at halftime. Texas, fortunate to trail by only 13 points at the break, shot 20 percent from the field and even missed four of its 11 free throw attempts.

The Longhorns recorded just one assist in the first half, from Jonathan Holmes to Connor Lammert on a three-pointer at the 16:19 mark, their only three-pointer of the half. Lammert, who scored a career-high 14 points in Texas’ 89-86 double-overtime win over Iowa State this Wednesday, scored all seven of his team-high first-half points within the first 4:04 of the game.

The rest of Lammert’s teammates combined for eight points on 2-for-18 (11.1 percent) in the first half.

Senior Travis Releford, who wears the No. 15 that Mario Chalmers, whose jersey number was retired at halftime, once wore, led the Jayhawks with seven points in the first half, hitting a pair of three-pointers early on in the period. Ben McLemore, who many believe is the top NBA draft prospect in the country and who scored 30 points in a win over Kansas State earlier this week, scored six points, along with his teammate, senior Jeff Withey.

The 15 points scored by Texas in the first half against Texas tie the fewest it has ever scored in a half in Big 12 play. The Longhorns were also held to 15 points during the second half of a 46-43 loss to Texas A&M on Mar. 1, 2006.