Blanton turns 50, celebrates with first ever gala after party 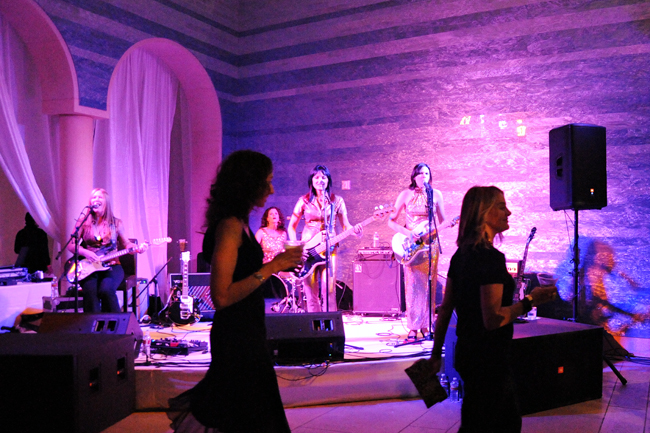 The BlueBonnets perform at the Blanton Museum of Art 50th anniversary party. Guests toasted to the Blanton’s Big 50 gala during “Gold a Go-Go,” an afterparty with art, live music and dance.

The Blanton Museum of Art raised funds and glasses on Saturday to commemorate its 50-year anniversary.

The Blanton celebrated its biannual gala as the official University art museum. The evening’s festive events concluded with the first ever gala after-party dubbed “Gold a Go-Go” held inside the museum.

Ticket holders were treated to a live performance by The Bluebonnets, which featured special appearances by Charlie Sexton and Kathy Valentine, a former member of Go Go’s. More than 570 guests were in attendance from Texas and around the country, said Samantha Youngblood, manager of public relations and marketing for the Blanton.

“We have a gala every two years, but this is our first ever gala after-party,” Youngblood said. “The gala is a large fundraising event for us because we are a nonprofit.”

The Blanton also opened its new exhibit, Through the Eyes of Texas: Masterworks from Alumni Collections, for advanced viewing. The exhibition features nearly 200 works, works from the private collections of UT alumni across the United States, which include works by Claude Monet and Pablo Picasso.

“It’s everything from Mayan artifacts to your super contemporary works like Kehinde Wiley,” Youngblood said. “It’s a very large undertaking and I think it illustrates the Blanton’s connection to the University.”

Martha Bradshaw, manager of visitor and volunteer services at the Blanton, said the evening was a success for the museum, a testament to its last 50 years and an exciting look toward its future.

“Its a commemoration of the past and the launch of the next 50 years,” Bradshaw said. “It’s been a great moment, a definite success. Many of our guests tonight have never been here.”

Mechanical engineering sophomore Christopher Tran volunteered to work at the event to support the museum as part of the Blanton Student Guild.

“Even if you’re not really interested in art, it’s a great place to come relax in between classes or after a test,” Tran said.

Events commemorating the museum’s 50th anniversary are ongoing. This week is UT preview week at the museum. Students, faculty and staff are encouraged to view the Masterworks collection before it opens to the public Sunday. On Apr. 27, festivities will come to a head with a 12-hour birthday party and arts festival called Blanton Fifty Fest. It will be free and open to the public.