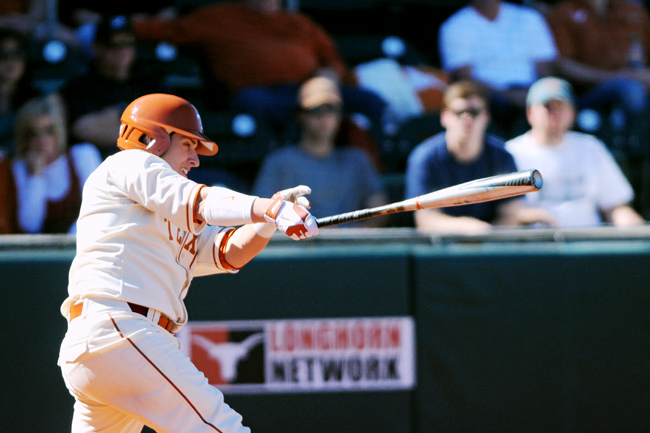 Outfielder Mark Payton takes his turn at bat during the Longhorns’ victory Sunday against Sacrament State. Texas won the series with the Hornets 2-1.

Everything that plagued the Longhorns in Saturday’s loss seemed to go right for them on Sunday.

Texas used a combination of timely hitting and strong starting pitching to defeat the Sacramento State Hornets by the score of 6-3 to clinch the rubber game of its season opening series.

Starting pitcher Dillon Peters overcame a shaky first inning and pitched seven efficient innings, allowing just five hits and two runs. After hitting and walking the Hornets’ first two batters to lead off the game, the left-hander was able to make adjustments and effectively pitch to contact throughout the afternoon.

“You don’t really focus on mechanics out there,” Peters said. “I just came in the dugout and worked on working it down and staying on target.”

The Texas lineup had a much improved day in the series finale, recording 11 hits and knocking Hornets starter Zach Morgan out of the game after just three innings. The Longhorns scored at least once in each of the first four innings Sunday, and head coach Augie Garrido believed that this was important in allowing Peters to settle in to the game.

“Any time a pitcher sits on the bench and watches the offense score runs, he feels a lot more confident and he doesn’t feel like if he gives up one run then he’s going to lose the game,” Garrido said. “When they go out there thinking they can’t give up a run is when they overpitch, walk guys and get out of rhythm.”

Right fielder Mark Payton continued his hot hitting with a pair of hits, including an RBI single in the first inning to give Texas its first run. The junior, who had seven hits in 12 at bats over the weekend, also added a triple to leadoff the third inning and scored on an RBI groundout by third baseman Madison Carter.

The Longhorns scored two runs in the second inning on a pair of bunts by Weston Hall and Taylor Stell with runners on third base. Stell went 2-3 on the day with a stolen base and would add another RBI on a sacrifice fly in the fourth inning.

Texas closer Corey Knebel picked up his first save of the season after pitching the eighth and ninth innings for the Longhorns. The right-hander, who failed to record an out in Friday’s game, allowed one run on a solo home run and struck out two batters.

Texas’ next game comes Tuesday when they host UT Arlington at UFCU Disch-Falk Field at 6 p.m. The Mavericks swept Louisiana Tech in their season opening series over the weekend.

Published on February 18, 2013 as "Horns outlast Hornets in debut".