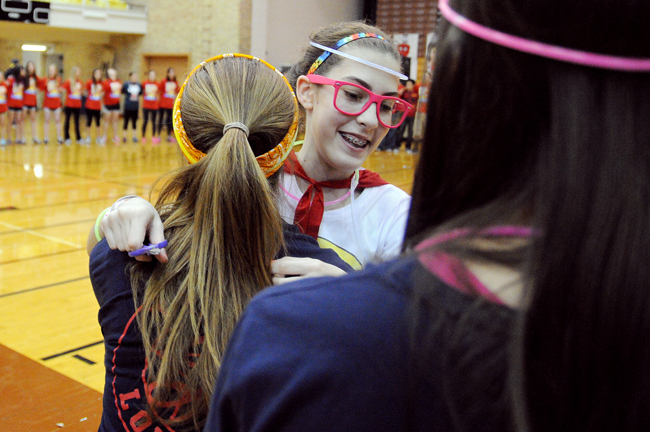 More than 100 volunteers — including superheroes such as Batman, Superman and Wonder Woman — raised about $36,000 Saturday at Gregory Gymnasium for the annual Texas THON.

In its 11th year, the Texas THON is a philanthropic event produced by UT students where volunteers raise money by pledging to stand — literally, without sitting — for 12 consecutive hours for children in need. All proceeds go toward the Dell Children’s Medical Center of Central Austin.

The organization conducts fund-raising throughout the year, which culminates in a day filled with live entertainment, free food, games and dancing. Texas THON is one of many similar events held at universities across the nation to raise money for Children’s Miracle Network hospitals.

In her Batman costume, executive chairwoman for Texas THON Caitlyn Leal said she felt the event was a success for the Dell Miracle Kids.

“The energy was so high,” Leal said. “Our exec team had a lot of obstacles this year so the amount we raised in the matter of weeks is amazing. It was such a success. I couldn’t have asked for anything better.”

The theme of this year’s event was “Super Heroes Stand 2013,” where volunteers and Miracle Kids dressed up as their favorite superhero.

“Every year we do a new theme,” Stephanie Morgan, Plan II senior and catering and sponsorship chairwoman, said “and this year we really wanted it to relate to what Texas Thon actually is doing. We wanted to be superheroes for the kids at Dell Children’s Medical Center because they’re an inspiration to us so we want to be an inspiration to them.”

Texas THON invites Miracle Children to speak about their experiences at the event. Math junior Lisa Huynh said hearing those stories serves as an inspiration to her to “stand” for them.

“Personally it is really touching to hear all of the families come speak,” Huynh said. “I used to have a little brother that had to go to the Children’s Hospital so it’s near and dear to my heart. One of the great things about Dell is they don’t turn away kids so that’s what makes it rewarding for us to do this.”

Marley, a Miracle Kid, was one of the children that spoke at Saturday’s event. At the age of five, Marley was hit by a vehicle that affected her ability to walk. During the aftermath and her recovery, she stayed at Dell Children’s Medical Center.

“It’s a very scary place to be when you’re a young child,” she said. “It’s frightening so you guys, what you’re doing, you’re raising money obviously, and you’re helping make everything safer and it feels safer. You make it so much easier for kids like me.”

Marley and all of those who participated in the Texas THON wore hospital bracelets with the name of different Miracle Kids on each bracelet. At the end of closing ceremony, the volunteers gathered in a circle to have their bracelets cut off their wrists to symbolize when a Miracle Child can leave the hospital. Marley walked, on her own, around the circle to cut over a hundred bracelets off the wrists of UT students and other volunteers.

“That was the first time in my life I’ve ever cried of happiness,” she said. “That shows how awesome you guys are. Thank you so much.”