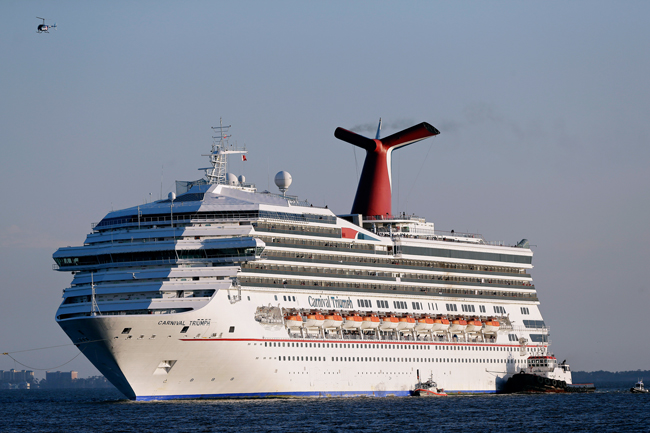 Cmdr. Teresa Hatfield addressed the finding in a conference call with reporters and estimated that the investigation of the disabled ship, the Carnival Triumph, would take six months.

Hatfield said the Bahamas —where the ship is registered, or flagged — is leading the investigation, with the Coast Guard and National Transportation Safety Board representing U.S. interests in the probe. The vessel was in international waters at the time of the incident.

She said investigators have been with the ship since it arrived Thursday in Mobile. Since then, she said, interviews have been conducted with passengers and crew and forensic analysis has been performed on the ship.

She said the crew responded appropriately to the fire. “They did a very good job,” Hatfield said.

In an email after Monday’s conference call, Coast Guard spokesman Carlos Diaz described the oil return line that leaked as stretching from the ship’s No. 6 engine to the fuel tank.

A Carnival Cruise Lines spokesman said in an email Monday that the company agrees with the Coast Guard’s findings about the fire source.

Andrew Coggins, a former Navy commander who was a chief engineer and is now a professor at Pace University in New York and an expert on the cruise industry, said the fire could potentially have been serious.

“The problem is the oil’s under pressure,” he said. “What happens in the case of a fuel oil leak, where you have a fire like that, is it leaks in such a way that it sprays out in a mist. In the engine room you have many hot surfaces, so once the mist hits a hot surface it will flash into flame.”

If the crew hadn’t reacted quickly and the fire suppression system hadn’t worked properly, he said, “the fire from the engine room would have eventually burned through to other parts of the ship.” Engine room fires that can’t be suppressed generally result in the loss of the entire ship, he said.

The Triumph left Galveston, Texas, on Feb. 7 for a four-day trip to Mexico. The fire paralyzed the ship early Feb. 10, leaving it adrift in the Gulf of Mexico until tugboats towed it to Mobile. Passengers described harsh conditions on board: overflowing toilets, long lines for food, foul odors and tent cities for sleeping on deck.