Kansas shows dominance in series with humiliating win over Texas 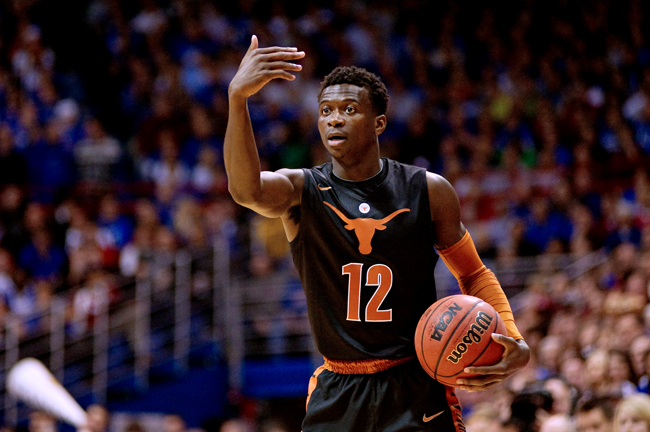 Myck Kabongo is averaging 13.0 points and 3.5 assists per game since returning from a 23-game suspension to start the season. If Texas wants to find success he’ll need to find his groove quickly. " />

Myck Kabongo is averaging 13.0 points and 3.5 assists per game since returning from a 23-game suspension to start the season. If Texas wants to find success he’ll need to find his groove quickly.

The hopes that Myck Kabongo would revive this team with a strong finish to end the conference slate on a high note are lost.

The only thing left for Texas to do in the wake of the loss to Kansas is to pick up the pieces of its program and figure out where it all went wrong and how it can become competitive again.

In other words, there aren’t many positives that can be taken away after Saturday night.

Kansas completely shut Texas down with its defense and its offense was good enough for a 26-point win over Texas. “You give a team like Kansas breathing room and they can be loose and free, they make shots,” head coach Rick Barnes said after the loss Saturday. “I think we have to give them credit with their defense, but we had a lot of looks that we would have liked to make, but you have to make them.”

At first it seemed like Texas would be able to keep up with Kansas. The interior defense denied Kansas anything in the paint. But as soon as the Jayhawks figured out how to beat it, they were able to roll to 38 points in the paint.

Meanwhile, the offense was completely lost for nearly the entire game. The Longhorns only had five field goals in the first half, with Demarcus Holland getting an open dunk with 37 seconds left in the half. Kansas started off hot hitting its first four three-point attempts. Eventually the Texas offense devolved to jacking three-pointers in an attempt to finally make one – which it infrequently did – going 2-for-21 from beyond the arc.

Texas was hesitant to penetrate the paint while KU’s Jeff Withey patrolled around the rim, and the team couldn’t consistently find ways to get him out of position.

To put it simply, things came easy for Kansas. Texas became easy to defend, while its defense gave up too many open shots to the Jayhawks.

At the same time, everything was hard for Texas. It couldn’t handle Kansas’ ball movement on defense and had absolutely no offense.

It was an embarrassing game for the Longhorns, and to say they got run out of the arena by Kansas would be an understatement. The loss drops Texas’ road record to a pitiful 0-7 on the road and 1-4 in neutral games. Next is a road game against TCU. It looks winnable on paper, but that is likely the same thing that Kansas thought before its 62-55 loss to the Horned Frogs on Feb. 6.

TCU’s only conference win was against Kansas, but Texas is not much better with three wins in Big 12 play this year. It is clear the Texas program isn’t what is was a few years ago when it was competing for conference championships with the Jayhawks. It may no longer be at Kansas’ level, but it needs to show that it hasn’t dropped down to TCU’s level.

Another road loss would lower this horrific season to apocalyptic levels.