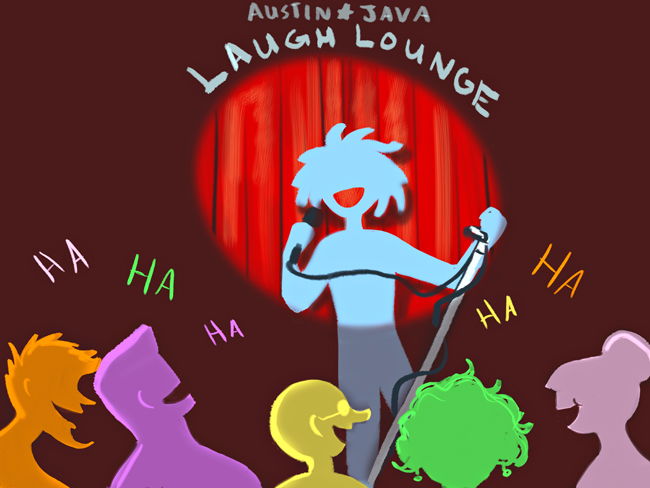 Every Wednesday at 9:00 p.m., the Java Lounge transforms into the Laugh Lounge where the local, everyday folk of Austin come to present their comedic talents at an open mic night

Comedian Kat Combs walked in wearing a red jacket and a silver lip ring. She greeted others in the crowd, knowing almost everyone in the room. Combs said many of the comedians that come to the open mic night often return, resulting in a family atmosphere.

“I come here every week and I like that down here it’s a separate room, as if it’s our own space,” Combs said.

After Combs greets everyone, she and the other comedians pull out their note-scribbled journals to studiously look over the comedic work they have prepared for the audience. In the show, titled “Comedy at the Java Lounge”, local Austinites come together to create a thriving comedy club that relies on their own efforts to make the night successful.

“Most stand-ups have things to say, but there’s a lot of improv too, a lot of performance,” host Duncan Carson said. “I’ve always wanted to do comedy. I used to be a writer, but this a much more fun thing to do. I love telling jokes.”

In the shabby chic basement of the Java Lounge, the locals begin to sign their names on a list that will ensure them a four-and-a-half minute spot to perform their best jokes. One man who signed his name wore a shirt that read “SARCASM: it Beats Killing People,” while another man played a ukulele until names started being called to perform.

At 9:00 p.m., Carson got to the stage and began the night by doing his own stand-up.

“Stand-up is the most exciting, most fun thing I know how to do. It’s an adrenaline rush every time, whether it goes well or badly,” Carson said. “I still get nervous, but after doing it for a while it’s more that I really want everyone to enjoy themselves.”

With laughter filling the room, it appeared obvious that the audience enjoyed themselves, but that doesn’t mean Carson works without stage fright.

“Basically you just keep doing stand-up until that instinctual fear of the spotlight wears away and you’re sort of comfortable up there. But it’s still a very heightened, exciting thing to do for me,” Carson said.

Sophomore Grace Newman sat at one of the tables in the Java Lounge with her books spread around her. Newman said the atmosphere and easy location are what draws her there.

The venue is an accessible hangout as well as the home of “Comedy at the Java Lounge”, and Carson said this diverse mixture of activities is what makes Austin Java able to attract a diverse audience.

This hidden stage is the home of many comedians that first began their comedic career. Carson said open mic night is a place for anyone who wants to make people laugh, with or without experience.

“New comics just want to do well consistently, and making people laugh is everyone’s goal on a night-to-night basis,” Carson said. “Some people I talk to are pretty frank about considering it just a hobby, but they usually have some other form of creative expression. Everyone wants to be a star.”