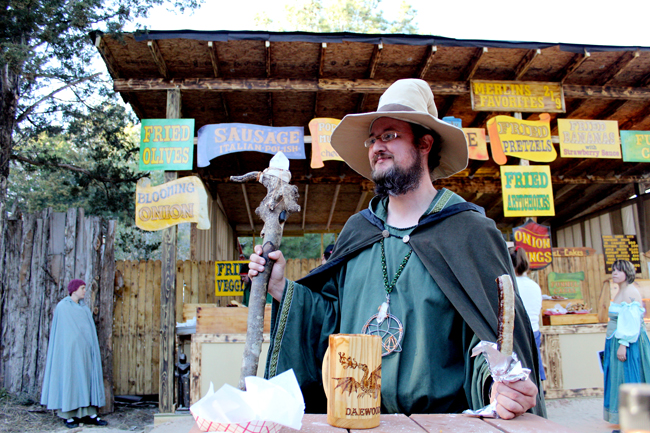 Festival-goer Dave Pluth enjoys a sausage and a beer Saturday afternoon at the fourth annual Sherwood Forest Faire just east of Austin. Every year, the fair attracts a large variety of people to celebrate and gather around food, music, fantasy, and craft. " />

Festival-goer Dave Pluth enjoys a sausage and a beer Saturday afternoon at the fourth annual Sherwood Forest Faire just east of Austin. Every year, the fair attracts a large variety of people to celebrate and gather around food, music, fantasy, and craft.

Traveling down Old Highway 20 just east of Austin to the Sherwood Forest Faire feels like a journey into the past. In its fourth year, the local Renaissance Faire has become a highlight of Texas’ three fairs. Although it’s small when compared to the Texas Renaissance Festival or Scarborough Renaissance Festival, this fantasy fan destination has its own share of whimsical offerings.

The Renaissance fair moniker doesn’t necessarily encapsulate what the Sherwood Forest Faire is about. An abundance of Johnny Depp-esque pirates as well as Jules Verne’s steampunks litter the fairgrounds, making it clear that historical accuracy is the least of concerns.

“This place is far from historically accurate,” said Tali Stermer, a vendor of hand-painted, bird-shaped clay whistles. “It is more of a fantasy fair, if you will. Some people have elaborately backstoried characters, but most don’t. Most likely the people you hear speaking in Old English would be the fair employees.”

When asked if his outfit was his regular apparel, Stermer laughed at the thought.

“No, no, the only time I wear this is weekends when I work the fair,” Stermer said. “The few people who wear this stuff in their daily lives are freaks.”

There is a hierarchy among attendees based on how absorbed a person is in fantasy. Stermer himself was born at a Renaissance fair in Largo, Fla., and has worked at fairs since he was a child. Despite being born in and raised at Renaissance fairs, Stermer hasn’t lost the sense of fantasy and play that the fairs represent.

The phrase “family reunion” can be found all throughout the fair guide, a veritable book that lists activities, vendors and cast members.

Joey Robichaux, who works in software during the rest of the year, inhabits a shady spot on the fairgrounds where he reads tarot cards for guests. He has attended Sherwood since it began four years ago and has read tarot cards for 20 years. This camaraderie and tradition, he claimed, binds the fantasy community together.

“A huge part of a Renaissance fair is the tradition of coming back to the same place where you know you’ll find the same people over and over again,” Robichaux said. “It’s a tradition for a small, but growing group of people.”

“The best vendors are here and the best food. We love ogre toes, which are candied bacon wrapped in sausage wrapped in bacon then fried,” Jenney Stein said. “It might be 1,000 calories, but that’s what makes it tasty.”

The couple was dressed in intricately designed costumes that reflected a passionate interest.

“I am a airship pilot who lost his airship and she is an adventurer who couldn’t possibly get lost with the amount of compasses she has amassed all over her vest,” Robert Stein added.

Besides the family camaraderie of Renaissance fairs, the Steins love the collector’s hunt. Some regular attendees spend time perfecting their look. Instead of a Xbox, they’ve got antique brocade vests and engraved swords.

“We love asking everyone where they got this or that,” Jenney Stein said, “and hunting down the perfect accessory.”

Correction: May 28, 2014. An earlier version of this article misspelled the author's last name.