Will Chandler recovers from Crohn’s and earns Big 12 honors 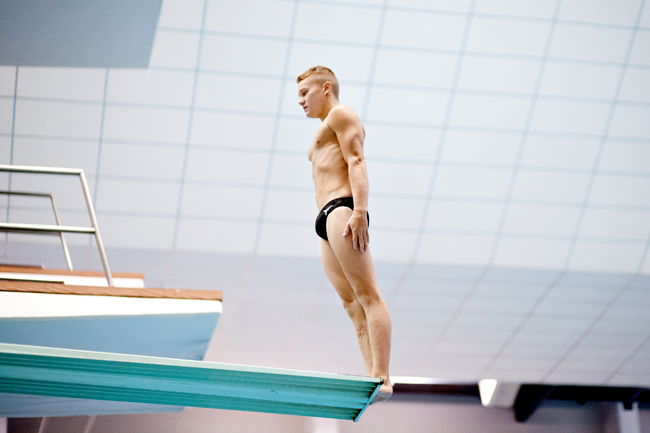 Freshman Connor Lammert attempts a shot in Texas’ 73-47 loss over the weekend. Lammert will carry an increased role into game with TCU, averaging 11.5 points per game in his last two.  " />

Freshman Connor Lammert attempts a shot in Texas’ 73-47 loss over the weekend. Lammert will carry an increased role into game with TCU, averaging 11.5 points per game in his last two.

After his dominating performances against TCU and Arizona, redshirt sophomore Will Chandler gained recognition from the Big 12 as the Men’s Diver of the Week last Wednesday. Despite it being the third time Chandler has received the award, this time holds a special significance: it was his first Big 12 Men’s Diver of the Week honor since coming back from Crohn’s disease.

Chandler was diagnosed with Crohn’s, a chronic inflammatory condition of the gastrointestinal tract, at age 12. However, it wasn’t until his sophomore year in college, in the middle of his development as a serious diver, that the disease became severe enough to require surgery.

“I had six feet of my large intestine removed,” Chandler recalled. “I lost like 20 pounds in the hospital, and that’s really important, because if you’re a little twig on the diving board, the board isn’t going to go anywhere when you jump on it.”

But diving coach Matt Scoggin wasn’t concerned with Chandler’s weight loss affecting his diving abilities. He was solely concerned with how it would affect his health.

“Sports took a back seat,” Scoggin said. “I was only concerned with Will progressing to complete health and managing the disease.”

Chandler’s diving may have been pushed to the back burner, but the diving team stepped up to support Chandler during his 24-day stay at the hospital.

“I saw a teammate in the hospital every day I was there,” Chandler said. “Matt came to the hospital three to five times. He brought me diving videos to watch so I could still stay in the mindset. That was really my strength.”

The struggle didn’t end when Chandler was released from the hospital. He had been out of the pool for about four months and lost a significant amount of muscle.

“It definitely plays a role in the back of your mind,” Chandler said. “When I do come back, am I going to be able to be as good or as strong as I was before?”

However, there is one haunting factor standing between Chandler and a successful career: the potential that Crohn’s disease will return.

Crohn’s is characterized by spontaneous flare-ups that could knock Chandler back to the beginning stages of the recovery process. Chandler acknowledges this possibility, but is hopeful the surgery, his medicine and diet will be enough to keep him healthy.

“There is definitely a chance it can come back,” Chandler said. “But before, I was really stubborn about it. Whenever I felt sick, I didn’t tell anybody, and that’s what made me so sick. Now I talk to my doctor every five days to make sure that’s not happening again.”

Further stalling Chandler’s progress was his still-recovering body. He couldn’t dive back into his normal workout and practice routines. He had to be reintroduced slowly.

“When I came back to practice, I didn’t even get in the water for another month,” Chandler said.

Scoggin did his best to accommodate Chandler’s condition while still advancing his skills.

“Coming back and working with Will, I had to adjust my coaching by listening to his doctor and trainer,” Scoggin said. “Speed was important. We couldn’t throw him back into workouts too quickly. I mean, he was coming back from major surgery.”

Chandler, who redshirted last year, has made substantial improvement in his return to diving. Receiving the Big 12 Men’s Diver of the Week award only further displayed his progress.

“It’s definitely a very slow progression, but my legs are as big as they’ve ever been,” Chandler said.

Scoggin recognizes Chandler’s abilities and has faith he can achieve NCAA recognition.

“One of the great things about Will is he’s always optimistic. He has such high goals and aspirations for himself,” Scoggin said. “He wants to be a great diver, and he has unlimited diving potential.”

“Its good for confidence,” he said. “But I want to be honored on the NCAA level.”