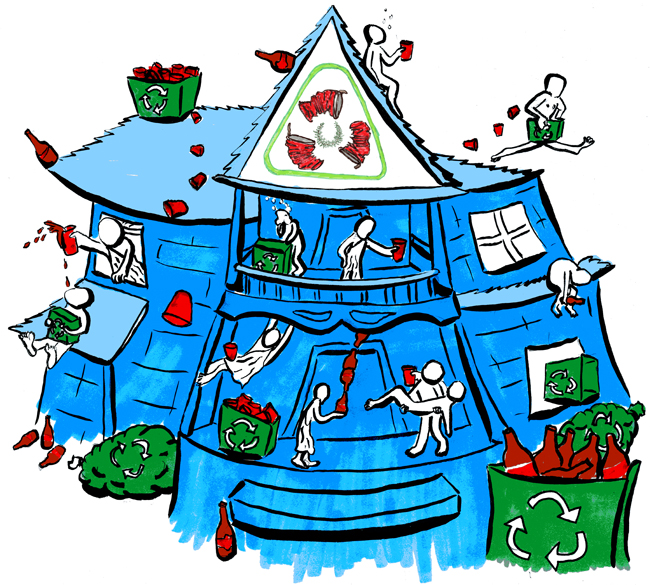 Each Saturday evening a neon glow and rising roar buzzes from the fraternity houses in West Campus. As the sun rises on another Sunday, the once pristine party site leaves in its wake a mountain of red Solo Cups and Keystone Light cans stacked on street corners and demolished lawns, and an eerie silence replaces the nighttime chaos.

Even on a low-key weekend at UT, an unimaginable amount of waste accumulates after fraternity parties. The Campus Environmental Center has decided to use fraternity frivolity to improve the ecological impact of the Austin community.

The CEC has started a program called Green Greeks. This program aims to send its representatives to each fraternity party, where they will collect and recycle the cups, cans and bottles that tend to be aimlessly thrown around.

Faith Shin, director of the CEC, has been trying to get this program off the ground for quite some time.

“CEC actually started this in 2008,” Shin said. “Unfortunately, the program was not as successful because of the lack of infrastructure within the Greek houses.”

The CEC is the largest organization on campus centered around the protection of the environment. They are a sponsored student organization that currently has four committees to address distinct ecological needs in the Austin area.

Elizabeth Harroun, an international business junior, is the first member of a Greek organization to recently become actively involved in the CEC and was the key to revamping Green Greeks. As the program attempts to renovate after its failure in 2008, Harroun has taken the role of coordinator.

“There are over 5,000 students in the Greek system, and they have giant events throughout the year,” Harroun said. “If we can impact the Greek system, we can get a lot of people, who may not have thought about it before, interested in sustainable living.”

Greeks have not made leaps toward environmental interest in the past. This is one of the first instances of widespread backing of an ecological cause throughout the community. However, some are not so sure this lack of interest will ever change.

One such doubter is Bridget Boyle, a freshman in the College of Liberal Arts and new sorority member.

“I think Green Greeks is a good idea in theory, but most Greeks seem to be apathetic to environmental issues. I don’t see a huge influx of Greek involvement anytime soon,” Boyle said.

Harroun, however, believes this program can help fraternities and sororities gain a better reputation and help loosen the tension between the University and Greeks.

“Maybe people will start to accept the party atmosphere if the fraternities are being conscious about waste and making an effort,” Harroun said.

Green Greeks held its first event Saturday at the Sigma Chi fraternity house. The group posted recycling reminder signs all around the house, spoke to party-goers about its cause and picked up errant cups off the floor. The next day the group returned to the house, separated all the trash and brought the recyclables to a recycling center for processing.

Harroun mentioned that some fraternities have been more accommodating than others, but Sigma Chi was thrilled with the CEC’s first event and the excitement from the Greek community.

Green Greeks collected almost 130 gallons of trash at its first event, a party that was considered relatively small by Greek standards. The Greek community seems to be generally accepting of this new venture by the CEC.

“As far as I’m concerned, fraternities will continue to have parties so we might as well be proactive with all of the trash and recycle it,” Michelle Brucato, a sophomore active Greek member, said.

The party cup of choice, the red Solo Cup, is made from polystyrene, labeled on products as a number-six plastic. Polystyrene is very difficult to recycle, especially in its expanded form, known as Styrofoam. Styrofoam is illegal in several counties in America. Products made from polystyrene often end up in landfills. Austin Waste Management, however, collects most plastics, glasses and aluminum products for recycling, including polystyrene goods. Green Greeks maintains that all the cups it collects are being recycled properly.

As clean as our campus appears during the week, waste piles up on the weekends as soon as the sun goes down. Cheap beer and curiously strong drinks will continue to be served to young men and women without fail, and the CEC hopes to put this waste to better use and to persuade the Greek houses to start thinking green.