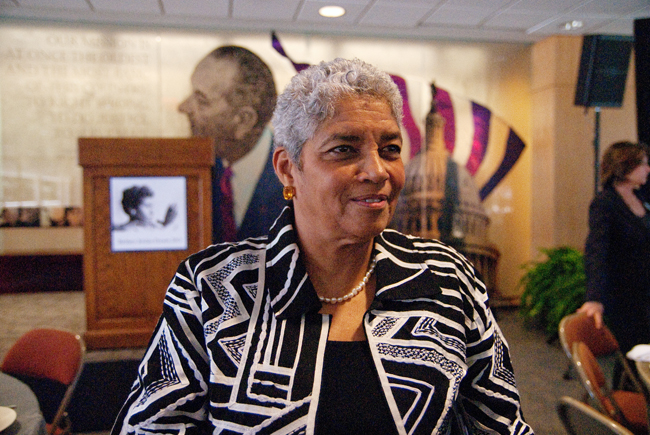 Former mayor of Atlanta Shirley Franklin gives a speech over Barbara Jordan’s legacy as a leader of ethics. The luncheon was held in honor of Jordan and emphasized her policy interests.

Members of the Texas Legislature, faculty, students and alumni gathered to honor the life and work of Barbara Jordan at a luncheon Tuesday.

As part of the 17th annual Barbara Jordan Forum, Shirley Franklin, a visiting professor in the LBJ School and former two-term mayor of Atlanta, delivered the keynote address at the luncheon. The event was one of many organized to honor Barbara Jordan, a former congresswoman and LBJ School professor.

The weeklong forum was organized by the Graduate Public Affairs Council to honor Jordan and her policy interests in immigration, gender and orientation equality.

Garry Davis, public affairs graduate student and president of the council, said he and his co-chairs reached out to other campus organizations to create events for the week.

“The three of us organized the student organizations to get together to collaborate on different brown bags and different events to honor Barbara Jordan,” Davis said. “It’s essentially honoring Barbara Jordan and her legacy because she played such a huge role as a professor at LBJ when she was here.”

At the luncheon, Franklin spoke about Jordan’s legacy as a leader of ethics and asked the question, “Who are the next Barbara Jordans?”

“Something within Barbara Jordan propelled her to be the person we celebrate today,” Franklin said in her address.

Franklin also spoke about Jordan’s work as a professor at the LBJ School and the lasting impression she left.

“People 20 years from now will look back and say not only did Barbara Jordan teach at the LBJ School … ” Franklin said, “Her spirit, her soul, her commitment is in the fiber of everything that happens.”

Public affairs graduate student Raul Sanchez said when he first came to the LBJ School, he was not familiar with Jordan and her work, but he became curious about her legacy.

“I’m really into social justice, so anybody that’s involved in the social justice arena, I’m going to gravitate toward,” Sanchez said.

Sanchez said the luncheon was great for learning more about Jordan and gaining inspiration from her work.

“This is an educational activity for me, and it’s something that I want to draw from,” Sanchez said. “What is going to motivate me to keep doing the work I do based on other people’s motivations, and in this instance, it’s going to be Barbara Jordan.”