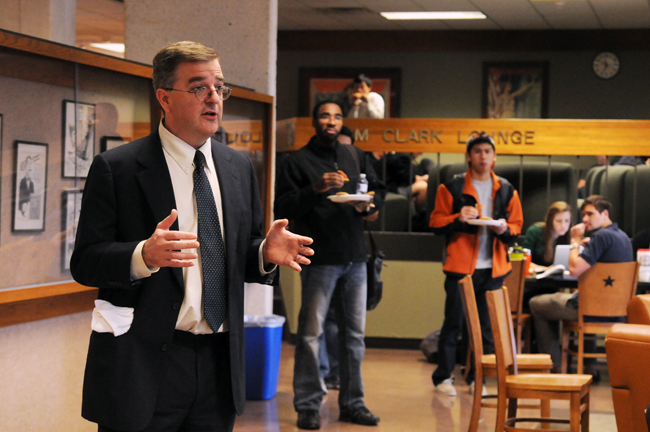 Dean Ward Farnsworth of the School of Law spent part of Tuesday at a meet and greet mingling with students as part of Law Week.

This is the 45th annual Law Week, an event meant for community building both within the law school and outside it, said Jackie Ammons, UT law student and president of the Student Bar Association.

Farnsworth spoke about his goals for the school and said he wants to make it the best place to be a law student.

Farnsworth plans to improve job rates by working with the school’s alumni to help create job opportunities. He wants to encourage the University to hire more alumni and also plans to improve mentoring of current students.

“We invite our alumni to stay involved in the school by getting to know our current students and offering them advice and guidance,” Farnsworth said.

In August 2012, the American Bar Association revised its standards to require more data disclosure from law schools, including employment outcomes and scholarship retention rates, according to the association.

“I support all efforts to improve transparency when it comes to job proqospects for students here and at other schools,” Farnsworth said.

The school has 308 newly enrolled students this year, down from 370 students in 2011, Farnsworth said. He said this was because of a bad job market and fewer applicants.

“I’m spending a lot of time trying to meet admitted students and encourage them to come here,” Farnsworth said.

Farnsworth is also channeling energy into improving student life. He named a few inconveniences, such as vending machines eating people’s money, broken latches in the restrooms and the quality of the coffee, that he hopes to improve. He said he would like the school to be free of little annoyances.

Second-year law student Katie Ostrander said the dean has sent out many emails to students about what they would like to see improved.

“He really cares about what students think,” Ostrander said.

Farnsworth was a professor and an associate dean at Boston University’s law school before becoming dean of the UT School of Law last summer.

Published on February 20, 2013 as "Dean socializes with students".