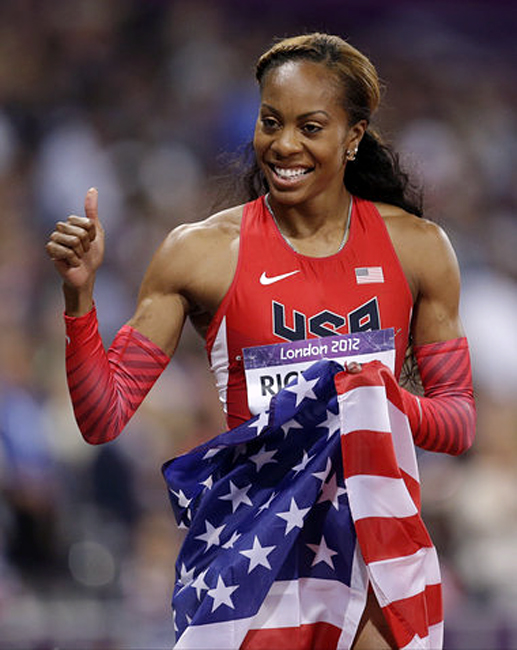 Sanya Richards-Ross, four-time Olympic gold medalist and UT alumna, will serve as the Commencement Speaker for the graduating class of 2013. Richards-Ross will speak on May 18. Photo courtesy of Markus Schreiber.

She stood on the podium at the London Olympics this summer, a gold medal around her neck, and now she will speak at UT’s spring commencement.

Sanya Richards-Ross, a UT alumna who won gold medals in the women’s 400-meter dash and the 4×400-meter relay at the 2012 London Olympics, will deliver the commencement address at the 130th Spring Commencement in May. Richards-Ross graduated from the McCombs School of Business in 2006.

Student Government president Thor Lund, who selected the speaker with Michael Morton, president of the Senate of College Councils, and Michael Redding, president of the Graduate Student Assembly, said Richards-Ross’ recent Olympic win is what made her an obvious choice.

“We wanted someone who shows that UT is a prestigious place,” Lund said. “[Richards-Ross] is a decorated Olympian — she represented our school and our country well in front of people from all over the world.”

In a statement, Richards-Ross said she was excited to speak at UT because the school still holds special meaning for her.

“The honor of being the keynote speaker at the UT commencement is one of the biggest honors of my career, and being chosen by the students makes it one of the most meaningful,” she said. “The University of Texas, its students, faculty and staff all hold a very near and dear place in my heart and always will.”

Richards-Ross has a total of five Olympic medals, including four golds. As a freshman on the women’s track and field team, she was the NCAA 400-meter champion. Richards-Ross’ college track coach, Bev Kearney, resigned in January after UT began termination procedures when it was revealed that she had a relationship with a former student-athlete roughly 10 years ago.

Richards-Ross has also engaged in philanthropic work globally. In 2007, she created the Fast Track Program, a charity focusing on tutoring Jamaican youth in literacy and mathematics and promoting an “active and healthy lifestyle through sports,” among other objectives. Richards-Ross was born in Kingston, Jamaica, and moved to the United States when she was 12 years old.

Electrical engineering sophomore Marina Dultra said she was excited to hear Richards-Ross speak because of her status as a UT alumna.

“I don’t know what she’ll be like as a speaker, but she’ll know what we’ve all gone through,” Dultra said. “She’s relatable. That’s pretty cool.”

Published on February 20, 2013 as "Gold medal Olympian to give speech to graduates".