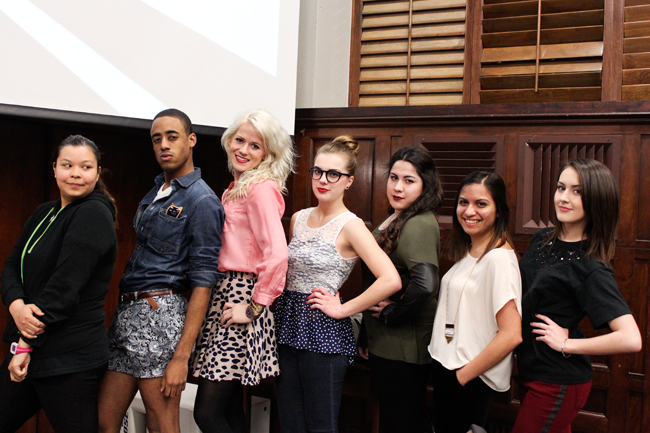 Members of the University Fashion Group who attended New York fashion week shared photos and experiences with the rest of the group at their meeting Tuesday evening.

From Feb. 7 to Feb. 11, UT students were exposed to the city and its fashion while acquiring hands-on experience backstage. To kick-start its first meeting since the week spent in New York, the group compiled a montage of clips and photos to summarize an unforgettable experience.

UFG is a student organization that promotes discussion and interaction between students interested in the apparel, textile and retail industries. According to its website, the UFG provides networking opportunities through internship and volunteer activities in the local fashion community. Select members also have had the opportunity each year to become involved in New York Fashion Week.

Textiles and apparel junior Shelby Smith said the trip was beneficial because seeing the atmosphere in person instead of sitting in a lecture hall makes the industry feel real.

“People have this stereotypical idea that fashion designers are on top,” said Smith. “This trip really proved that wrong. I never met so many famous people that thanked us and made us feel at home backstage. I learned from them that you can still be true to yourself in such a big city.”

UFG President Angeli Aguilera, who accompanied members of the group, said she has been going for the past three years and each time she feels more inspired.

“It’s a good experience because a lot of people are impressed by having Fashion Week under their belt,” Aguilera said. “New York is the major leagues for fashion. Just being there inspires you to apply it to our fashion show.”

Every year, UFG organizes the senior fashion show at the Frank Erwin Center. The event is open to the public and about 5,000 people attend, Aguilera said.

“You never know who you’re going to run into, so you always want to be well dressed and make a good impression,” said Watermiller.

Published on February 20, 2013 as "Fashion group participates in NYC trip".