Chelyabinsk reveals how unprepared we are for meteor strike 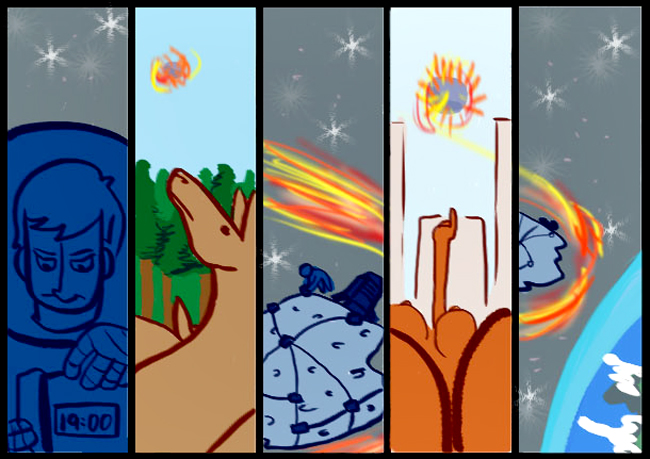 This past week, a 55-foot-wide meteor flew over the city of Chelyabinsk, Russia, leaving a trail of smoke in the Siberian skies and producing a shock wave powerful enough to shatter windows and injure hundreds of people. Anyone with access to YouTube can see recordings of the event and the images are awe-inspiring, terrifying and nothing compared to what they could have been if this wasn’t a bite-sized meteor.

Just over 100 years ago, another explosion in the sky — the Tunguska event (also in Siberia, coincidentally) — destroyed all of the trees in an area roughly two and a half times the size of Austin. The consensus viewpoint is that a meteor broke apart in the atmosphere, releasing 1,000 times the energy of the bomb dropped on Hiroshima. Again, though, the Tunguska meteor, even at estimates of six times the size of Chelyabinsk’s, was a minor blip in the radar.

Discussions of meteor impacts, for scientists, conjure up images of the Cretaceous-Paleogene extinction event from 65 million years ago, caused by a six-mile-wide asteroid (and, possibly, massive volcanic activity). Even though the asteroid was nowhere near the largest out there (which is over 600 miles wide), it was enough to remove approximately 75 percent of all living species from the earth, including all of the non-avian dinosaurs, and severely dwindle the populations of the survivors.

An event of this magnitude is extremely rare, occurring once in 100 million years, but there’s still the more realistic possibility of a smaller rock causing substantial damage in a populated area. We saw what the Tunguska meteor did to a forest — imagine what it could have done to a major city.

There are scientists in charge of monitoring potential meteors (called asteroids until they enter the earth’s atmosphere) and in the aftermath of the recent Chelyabinsk incident, they’ve received more funding, which is long overdue, because as of right now, we are woefully unprepared.

NASA estimates that we’ve catalogued no more than 10 percent of the asteroids large enough to devastate our planet. Unless we devote more resources to detection, our next major impact will most likely come as a complete surprise, just as the event in Chelyabinsk did, but possibly with more than a few scary YouTube videos to show for it.

Even if we did see an asteroid coming towards us, however, we don’t currently have a clear method of stopping it. We do have some clever ideas, however. One involves painting a side of the would-be-killer white, causing light from the sun to bounce off of the asteroid instead of heating it. The light’s momentum should, given enough time, move the asteroid out of our path. A similar idea involves using the gravity of a man-made spaceship to gently nudge the object away.

And, of course, there’s the more exciting notion of nuking the damn thing, as the heroes of the 1998 movie “Armageddon” did. Though very cinematic, the destructive route may not be ideal. It’s difficult to control explosions, by their very nature, and there’s no guarantee that a part of the asteroid won’t hit us and still cause considerable damage. This method would
probably only be used on the largest of asteroids, like the one seen in Armageddon, or as a last-ditch effort for the smaller ones.

As of right now, though, we can’t implement any of these methods without knowing about the asteroid long before its impact. Due to the limited number of asteroids we’ve catalogued, we probably won’t.

While preventing a large meteor impact is not as immediate a concern as reversing global warming, there’s a similar potential for harm: survivors of the actual strike would still need to contend with the climate altering after-effects. Hopefully the videos from Chelyabinsk provided enough of a motivation to push us into action, because right now there’s a giant rock, drifting somewhere out there in space, that has our name on it.