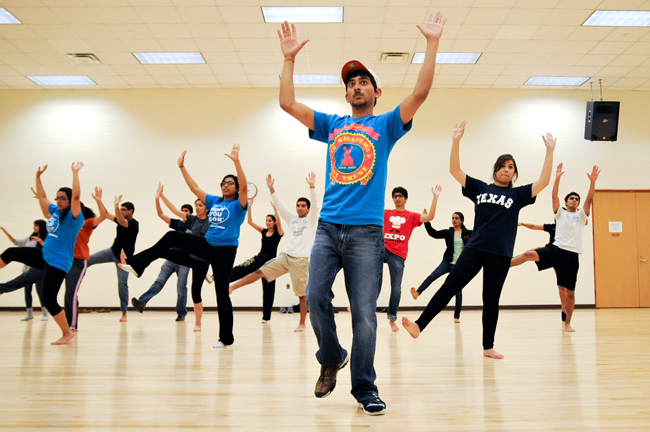 Junior Anish Nagar demonstrates how to dance a traditional Indian Jhoom at the Recreational Sports Center Wednesday evening. The dance clinic was hosted by the Indian Culutral Association.

“Mohini incorporates a variety of dance styles. Each girl [on our team] comes from different dance backgrounds. It’s very open to collaboration and creativity,” Agrawal said.

Bhangra is slightly more energetic, incorporating jumps and simultaneous movement of the hands and feet.

“[In Bhangra] you’re going to be dancing and throwing your hands up in the air,” Rahul Nowlakha, the organization’s vice president, said. “It’s very energetic. You’ll definitely work up a sweat.”

The event is part of the Indian Cultural Association’s efforts to spread Indian cultural awareness. Indian dance clinics, also known as Jhoom, provide a forum for direct and lively participation within a major facet of Indian culture.

“A lot of people don’t know a lot about Indian culture,” said Suruchi Avasthi, membership coordinator for the association. “If we try to make an event super fun like a dance clinic, they get to learn about it and get to interact with us and actively experience the culture.”

The association is frequently hosting events that bring Indian culture to the University. On Feb. 27, the association will sell Indian food at the West Mall as part of their monthly event called Rasoi – an Indian Kitchen. All students are encouraged to attend.