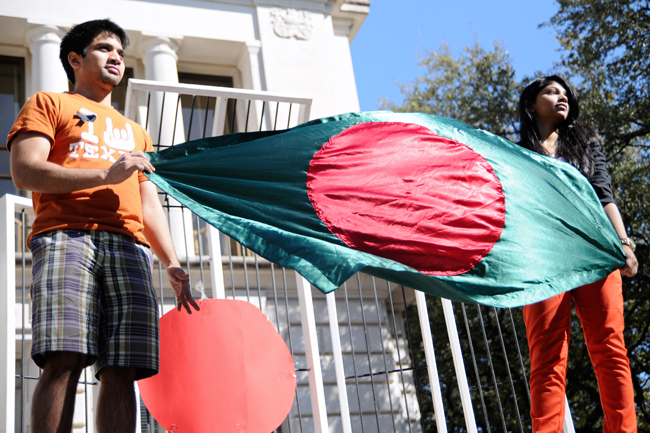 Members of the UT Bengali Students Association distributed pamphlets to students Thursday explaining the significance and history of International Mother Language Day, which raises awareness of the various languages throughout the world.

“It’s important everybody realizes that Bangladeshis fought for their language and everybody deserves the same,” electrical engineering junior Pulok Khan said.

Behind the students stood a model of a monument known as the Shahid Minar, which features five pillars with a red circle hanging on the middle pillar. Khan, a member of the association, said the monument represents the five students killed at Dhaka University on Feb. 21, 1952, at a time when Bangladesh was under the control of Pakistan and was known as East Pakistan.

Khan said the students were killed by police while protesting for the right to speak their native Bengali language instead of being forced to speak Urdu. The civil unrest that followed their deaths forced the Pakistani government to recognize the Bengali language as an official language in 1956.

In November 1999, the United Nations Educational, Scientific and Cultural Organization proclaimed Feb. 21 as International Mother Language Day in honor of the students’ deaths. Since then the day has been recognized every year as a time to increase awareness for the preservation and protection of languages and to celebrate the global diversity of languages.

“[Languages are] important to any individual because it provides a background for them,” Khan said. “It’s a good way for people to express themselves. I think that’s important.”

Economics and mathematics senior Orthi Rabbane said she joined the Bengali Students Association her sophomore year because she thought it was a great way to show her Bengali identity to a diverse student body.

“I liked the idea of helping put on events and explaining to the UT body about our culture,” Rabbane said. “It’s one aspect of culture that defines everyone — the way we communicate.”

Rabbane said the association organizes one cultural event on campus each semester. The event for this spring semester is the International Mother Language Day Memorial Event, which will be held Friday at 7:30 p.m. in the Student Activity Center.

Rabbane said the event will feature poetry and singing in Bengali as well as a screening of the movie “Amar Bondhu Rashed,” or “My Friend Rashed,” which is based on the liberation war which transformed East Pakistan into modern-day Bangladesh. The memorial event is free and open to the public.