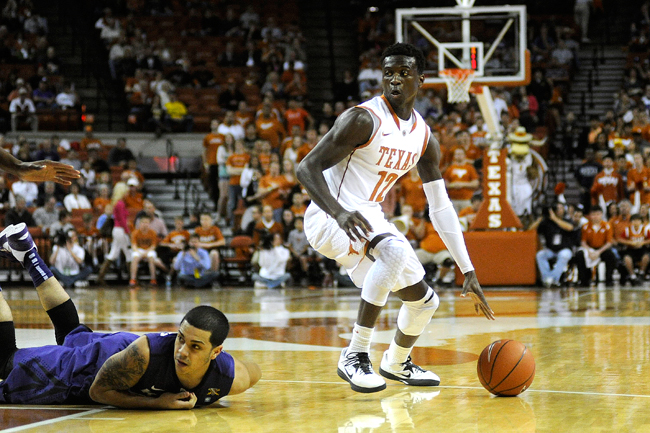 Point guard Myck Kabongo picks up a loose ball in Saturday night’s loss to Kansas State. Kabongo had a career-high 24 points but couldn’t propel his team past its conference foe.

After Kansas State handed Texas another lopsided loss this past weekend, the Wildcats kept their hopes of capturing a Big 12 title intact while the Longhorns, for the first time under Rick Barnes, will head into their final regular season contests with virtually no chance of reaching the NCAA Tournament.

“We are who we are,” Barnes said of his 12-15 squad. “The thing that bothers me about it is the effort, the preparation … When it goes like this, you’ll find out who checks out. If they check out, decisions will be made.”

Texas could usually count on a solid defensive effort but, despite entering last weekend with the nation’s best three-point defense, the Wildcats hit nine of 18 attempts from beyond the arc in an 81-69 victory over the Longhorns at the Frank Erwin Center on Saturday night.

“You look at the way some people played, we have to redo the lineup,” Barnes said. “We need consistency. And we need it from certain guys every single night … Guys get complacent and think they’ve arrived.”

Kansas State shot 48.1 percent from the floor and knocked down 20 of its 22 (90.9 percent) free throws in the win, their second dominating victory over the Longhorns this season. The Wildcats handed Texas an 83-57 loss Jan. 30, its worst road loss ever in Big 12 play.

Things didn’t go much better for the Longhorns on Saturday. Sheldon McClellan, after playing just one minute during Texas’ win over TCU last Tuesday, scored 15 points while fellow sophomore Myck Kabongo scored a career-high 24 points on 8-for-12 shooting.

“He’s a good player,” Kansas State point guard Angel Rodriguez said of Kabongo. “He’s pretty fast, especially when he’s trying to push the ball and he has a running start. In the scouting report, it said he wasn’t a good shooter, but today he made two [three-pointers]. He played a good game.”

The rest of the team was just 8-for-28 (28.6 percent) from the floor. Kansas State started the game on a 13-4 run before the Longhorns trimmed that lead to three points by the final minute of the first half.

But Kansas State scored five points in the final 21 seconds of the first half as Shane Southwell followed up a pair of Angel Rodriguez free throws with a runner from beyond the arc that barely beat the buzzer.

“It was big,” freshman Ioannis Papapetrou said. “It shifted the momentum of the game. Instead of it being a one-possession game, it ended up being a [three]-possession game.”

The Wildcats never looked back, cruising to a 12-point win and, despite Kabongo’s admirable effort, left Texas wondering once again why it’s in the midst of its worst season under Barnes.