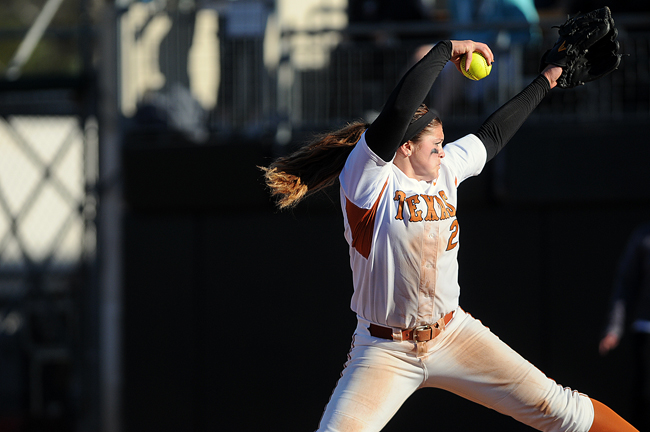 Senior Kim Bruins winds up for a pitch in Saturday’s game against Lamar. Bruins pitched her fourth complete game of the season adding two RBIs as her team went on to beat the Cardinals.

After both Texas and No. 24 Tulsa were held scoreless in the first seven innings of Sunday’s Texas Classic championship, Gabby Smith singled up the middle to bring Stephanie Ceo home for the win. The 1-0 victory marked Texas’ 16th win of the season, as Blaire Luna’s season-high 16 strikeouts redeemed the team from an earlier weekend loss.

The Longhorns suffered their first loss of the season with a 7-4 defeat against Tulsa later that night. Taylor Thom’s fourth-inning home run began the biggest Longhorns offensive threat of the game but the 5-0 deficit was too much to overcome.

“The big blow was the home run off Kim Bruins to give them a couple more,” head coach Connie Clark said. “Then they brought their second pitcher [Creger] in and she had a great rise ball. We haven’t seen that kind of rise ball yet this year, but it’s good for us to face that.”

Back on the field Saturday morning, Texas thumped Utah State, 13-2, scoring six times in the first inning. It then finished Saturday’s doubleheader with a 9-1 semifinals victory over Lamar. Kim Bruins’ versatility was on display as she pitched a complete game, scored one run and had two RBIs. Thom’s three RBIs and two hits brought her weekend count to eight RBIs.

“I’m going up to the plate with a plan and that’s really helping me,” Thom said.

In the rematch against the Golden Hurricanes Sunday morning, Luna allowed just three hits and did not issue any walks. But Tulsa’s Aimee Creger proved tough, shutting the Longhorns out through the first seven innings. Per international tie-breaker rules, each team began the eighth with a player on second. Both teams laid down sacrific bunts to give them runners on third base with one out. Luna finished Tulsa off by striking out the next two hitters to strand Julie Kernen at third. That set the stage for Smith’s walk-off single in the bottom of the eighth.

“It was an old-fashioned pitching duel and we kept [Luna] hidden on Friday for this very matchup,” Clark said. “We call it playing chess. You can figure what moves you’re going to make. It’s really a good experience for us this early in the season.”

The Longhorns next play Friday at the Citrus Classic Tournament in Kissimmee, Fla.