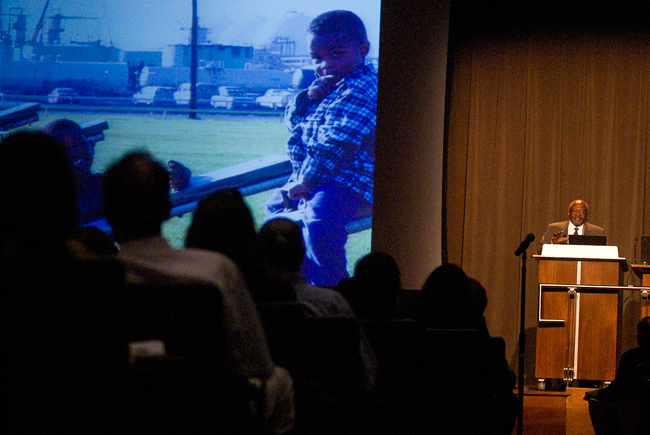 Robert Bullard, widely considered to be the father of environmental justice, said wide disparities in environmental quality still exist along racial boundaries in an open lecture in the Student Activity Center auditorium on Friday.

Bullard said because poor or minority communities are less able to fight back against polluting industries that want to move into the area, they are worse off.

“Your zip code is one of the most important indicators of health,” said Bullard, dean of Texas Southern University’s School of Public Affairs.

Bullard said people of color comprise 56 percent of people living in neighborhoods within two miles of commercial hazardous waste facilities, a fact that holds true even when controlling for income. He said state and federal governments should pay more attention to issues of environmental justice.

“In 2013, as we speak, all 50 states have executive orders or some type of state law or some type of policy on environmental justice,” Bullard said. “[But] there are some states that have this on the book and it’s worthless.”

Bullard said these states are generally in EPA regions four and six out of ten geographical divisions, which encompass the south and southeast. He cited examples like Baytown, Texas, where a public housing project is located across the street from a refinery.

In response to conflicting uses of land, Bullard said industry rights must sometimes give way to the public, which has a basic right to clean air and water.

“There has to be a strategy to somehow move toward a cleaner type of industrial operation,” Bullard said. “As we move from fossil fuels, there has to be a just transition.”

The lecture, sponsored by UT’s Green Fee and the Division of Diversity and Community Engagement, was the Environmental Science Institute’s 83rd “Hot Science — Cool Talks” lecture. Institute program coordinator Eric James said he is proud of the talk’s reach and influence.

“We’ve been presenting what is probably the largest and best attended lecture series at UT since 2000,” James said. “We’ve also made big efforts to get high school and middle school students here. Part of this is involving the K-12 community.”

“We’ve had 82 talks in this series and they’ve all been science based,” Banner said. “This was a departure for us, but one that was long overdue. This issue of social equity and justice when it comes to sustainability in the environment is really key. We can’t be simply looking at the environment from a science perspective.”