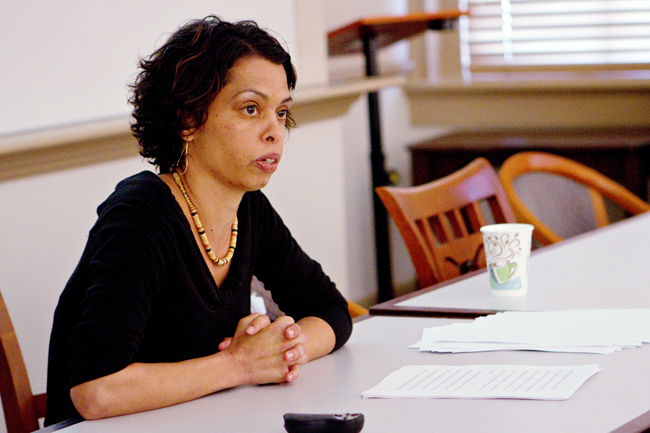 Drawing inspiration from Carribean fiction and queer authors, Omise’eke Natasha Tinsley, associate English professor at the University of Minnesota, talked to students about sexuality and religious concepts within Haitian Vodou. She described Ezili Freda, a force that protects both the female and male genders, as well as individuals who don’t identify as either gender, while discussing her upcoming book.

The Center for Women’s and Gender Studies sponsored the talk Monday afternoon at the Gebauer Building.

Tinsley said her unreleased book analyzes concepts of gender within historical Carribean works through the use of complex metaphors. She said she currently draws inspiration from Haitian-American contemporary performance artist MilDred Gerestant.

“Even though I hadn’t finished my first book, I was suddenly inspired to research a new second project: an analysis of 21st century Carribean fiction by queer writers,” Tinsley said. “This dream project dealt into historical novels that imagined complex genders and sexualities through the metaphor of time travel.”

Upon researching the works of queer authors, Tinsley said she discovered there was never mention of the terms queer, lesbian or transgender. Instead they talked about manifestations of these concepts and about spirituality and Afro-Caribbean religion.

“I wanted to reflect on Ezili as spirit but also on Ezili as archive,” Tinsley said. “That is I wanted to evoke the corpus of stories, memories and songs of Ezili as an expansive gathering of the history of gender and sexually variant people of African decent.”

According to Tinsley, the musical style of MilDred Gerestant has recently moved from hip-hop to Haitian Vodou. These performances draw on Hatian divinities including Ezili, in order to mediate on culturally specific imaginations of gender fluidity.

“Her performances integrate masculine and feminine variations in order to creatively embody the limits to global northern vocabularies of transgender,

suggesting an alternative in transcender,” Tinsley said. “That is an engagement with the submerged epistemology of Afro-Carribean religion.”

“All people have the possibility to be simultaneously man and woman, not because gender is constructed or performative but because they are surrounded by male and female spirits at the same time and may temporarily become those spirits at anytime,” Tinsley said.

“The talk was very eye-opening for me,” Thompson said. “It’s going to be a part of her new book and it’s going to be really ground-breaking in terms of making us think about gender in new ways.”