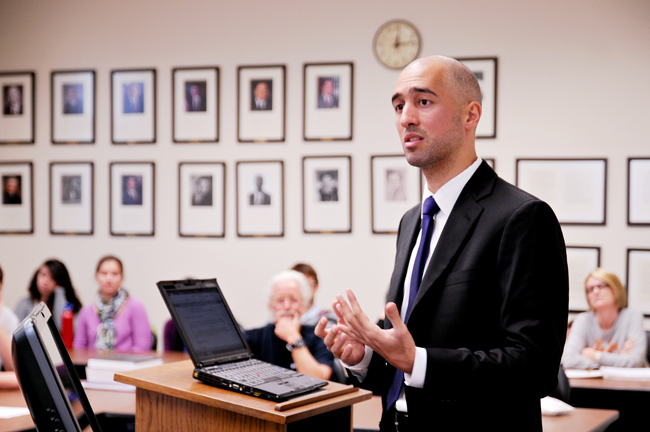 Associate law professor Ramzi Kassem talks about the cultural and political consequences of the American government’s use of torture as an interrocation tactic in the law school Monday afternoon. Following the release of the film “Zero Dark Thirty”, a national debate sparked focusing on this tactic. " />

Associate law professor Ramzi Kassem talks about the cultural and political consequences of the American government’s use of torture as an interrocation tactic in the law school Monday afternoon. Following the release of the film “Zero Dark Thirty”, a national debate sparked focusing on this tactic.

“Zero Dark Thirty” may have only tied for an Academy Award on Sunday night, but it produced enough controversy to avoid living in the shadow of the Oscar winners.

The film emphasized the ongoing national debate about America’s counterterrorism efforts, particularly the use of torture on Middle Eastern prisoners, said Ramzi Kassem, associate professor of law and director of the Immigrant & Non-Citizen Rights Clinic at the City University of New York, during a talk Monday at the law school.

As supervisor of Creating Law Enforcement Accountability & Responsibility, a project focused on confronting legal issues of Muslim, Arab and South Asian communities in the New York City area, Kassem revealed several torture tactics that his clients face. He said they are far more brutal than on-screen depictions in “Zero Dark Thirty,” highlighting the fact that the film and the ensuing debate tend to ignore fatalities and survivors.

“The central questions driving the debate are themselves a distraction,” Kassem said. “Whether torture lead to the death of Osama [bin Laden] or whether it strategically worked are distractions because they mask what ought to be the focus of whenever torture and execution are discussed.”

Kassem faulted the Obama administration and its efforts, or lack thereof, in fulfilling promises to crack down on this illegal practice.

“Those who liked the film, those who didn’t and critics of the debate all have been unanimous in treating U.S. torture as a practice of the past,” Kassem said. “But when a team of U.S. commandos, in violation of sovereignty, conduct a kill operation, it’s clear that this presents a serious question for international humanitarian law.”

Michael Beispel, Asian cultures and languages junior, said he was enlightened after hearing a completely different side of an issue that he had not previously been exposed to.

“It’s especially surprising to hear the government’s promises to help the issue, but then doing the exact opposite by making it really difficult to litigate against,” Beispel said.

The Bernard and Audre Rapoport Center for Human Rights and Justice, the Department of Anthropology and the National Security Clinic were among the groups that sponsored the talk, which was titled “Zero Dark Thirty” and Torture in American Discourse.

Sofian Merabet, anthropology assistant professor and host of the talk, said Kassem’s lecture was topical and originally meant to be part of a series in the social sciences and Middle Eastern studies.

“As an anthropologist, there’s many different things to take away from Kassem’s lecture,” Merabet said. “It’s very important to make the connection between cultural events, particularly with this movie and broader structural problems.”

During the last 40 minutes, Kassem welcomed the audience to ask questions and participate in discussion.

“We must pay attention to a lot of troubling stuff that are going to bare on the future of this country and the world,” Kassem said. “We can’t be satisfied with ‘Just trust us.’ We have to press elected officials.”