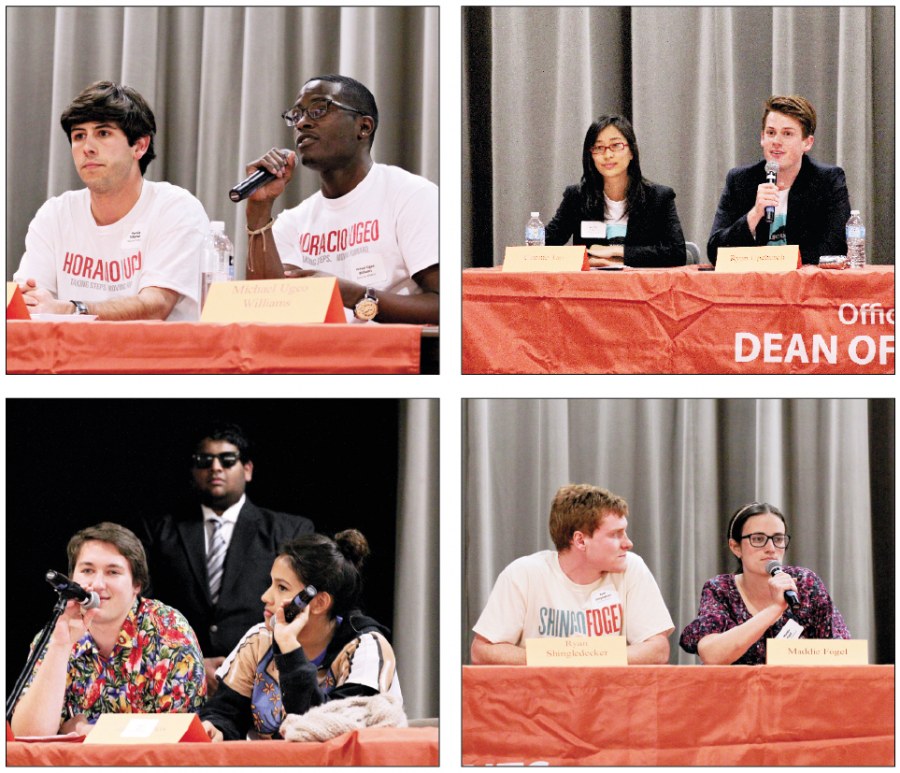 Homeless individuals on campus, Student Activity Center couches, police call boxes, a bear pond and protection of “ginger” communities were just a few of the topics covered Monday at the Student Government executive alliance debate, hosted by the Dean of Students office and moderated by the Election Supervisory Board.

The alliances include Chris Gilman and Alison Stoos; Ryan Shingledecker and Maddie Fogel; Connie Tao and Ryan Upchurch; and Horacio Villarreal and Ugeo Williams. The candidates for university-wide representatives also spoke about how they hoped to improve campus.

Gilman, radio-television-film junior, and English senior Stoos said the homeless population was the pressing issue on campus, suggesting to house them using the Student Government initiative of extended hours at the Perry-Castañeda Library. The alliance also said they would like to make changes to the turtle pond.

“The turtle pond on campus, why?” Gilman said. “What we want to do is make it a bear pond, put bears there and have on-sight security guards tranquilizing them all-day so they’re just sleeping. You can take pictures, put them on your iPhone, put them on Instagram.”

Shingledecker, an international relations and global studies senior, and English junior Fogel said their “voice box” initiative to hear suggestions and complaints from students will make Student Government more approachable for students to express concerns and solve tangible issues replacing the furniture on the second floor of the SAC.

“Student don’t feel valued,” Fogel said. “We go to a big school and feel that we’re not all known and that doesn’t love us back. That’s why only 7,000 people vote. You can’t just vote for someone flippantly as a joke.”

Tao, a radio-television-film, finance and business honors junior, and finance junior Upchurch said their campaign efforts to reach students in a creative and entertaining way is what students want out of Student Government. The alliance said they want to continue reaching out to disadvantaged students, including those with red hair.

“I want to engage a greater portion of the UT population,” Tao said. “Student Government needs to interact with those marginalized or forgotten. SG is so far removed from the whole of the student body and we are here to bring them together. For all the students that didn’t go to class today because of the wind, for all the ones that hooked up on ShingoFogel’s couches, who want their voice to be heard. This one’s for you.”

History senior Villarreal and Williams, a sociology and education senior, emphasized their campaign platform point to improve student services and safety around campus. The alliance spent much of the debate defending against rebuttals of the other candidates. The alliances said they want to improve incoming students’ campus mentors, increase the number of police call boxes and make students more aware of their use.

“Student services is a huge thing that we pay our money to fund,” Williams said. “We want to reach out to as many communities on campus as we can. We know we won’t be able to touch everyone but we want to.”

Elections will be held Wednesday and Thursday. Students can vote on utexasvote.org.