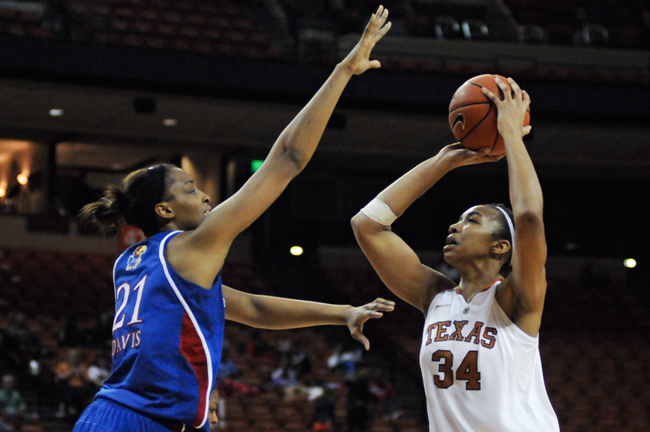 After dropping another conference game to the Big 12 champion Baylor Bears this weekend, the Longhorns sit at ninth place in the conference standings at 3-12, with three games left before the conference tournament begins. Even with the loss, however, their next opponent is still beneath them.

The last time the Longhorns and Horned Frogs met on Feb. 2, the Longhorns squeaked out a 61-56 win behind double-doubles from Imani McGee-Stafford and Nneka Enemkpali. Despite TCU starting the game on a 9-0 run, the post presence for Texas proved too much for the Frogs as it outrebounded them 43-34.

McGee-Stafford played perhaps her best game of the season in that game, tallying a career-high 23 points to go along with 13 rebounds and seven blocks. The freshman is playing the most consistent basketball for Texas while averaging a near double-double, with 10.7 points and 9.6 rebounds per game in Big 12 play.

Junior Chassidy Fussell has been an interesting topic during the last few games, scoring 27 against Texas Tech before dropping 26 against Kansas. Her hot streak ended with a 7-for-20 shooting effort for 16 points against Baylor, but her confidence is back, which makes the Longhorns a scary all-around opponent.

Head coach Karen Aston was quoted after Texas’ stunning 10-point win over Kansas as saying her team was growing up right before her eyes. The 20-point loss to Baylor was ugly, but that shouldn’t change her tune.

Texas has been a power in the paint all season long, and its perimeter game is beginning to follow suit with solid play from Fussell and freshman Empress Davenport over the last few games.

TCU picked up its first win in the Big 12 with a 64-63 upset over Oklahoma State last week, but the Horned Frogs represent the Longhorns’ best chance for another victory.