Defense propels Longhorns past early second half surge from TCU 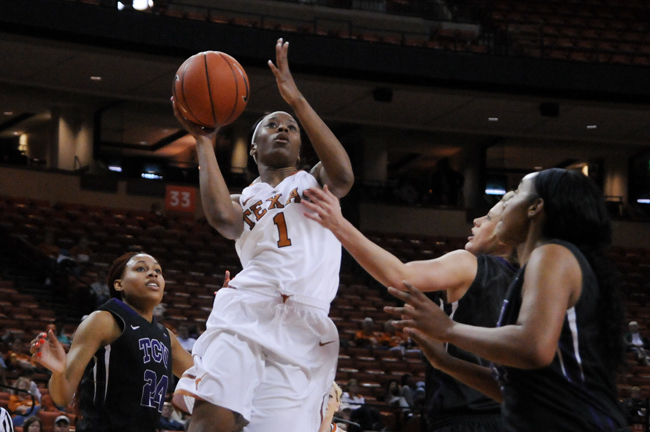 Freshman guard Empress Davenport saw 36 minutes of playing time and scored a season-high 15 points in Texas’s sweep of TCU.  Davenport had plenty to celebrate: Tuesday was also her 19th birthday.

The Texas Longhorns bounced back from their 20-point loss to Baylor last weekend by defeating the TCU Horned Frogs 59-46 Tuesday night. Defense fueled the Longhorns’ effort as they held the Horned Frogs to 30.2 percent shooting in the game.

Texas’ defense looked impenetrable in the first half as it forced TCU into 17 missed shots on its first 18 from the field. The Texas offense finally found a formula for getting out of the gates early, moving the ball well against the zone defense of TCU, leading to a 21-3 run to start the game.

“That is the second game in a row against Texas that we have gotten zero production out of those forwards,” TCU head coach Jeff Mittie said. “You are not going to beat them that way because their strength is in their four’s and five’s and in their rebounding.”

Imani McGee-Stafford carried the load inside in the first half, recording seven points and seven rebounds as Texas outrebounded the Horned Frogs 27-15. Despite only shooting 40.7 percent in the opening frame, the Longhorns held TCU to 21.9 percent to take a 30-18 lead into halftime.

Entering the second half it appeared the Horned Frogs had solved the puzzle of the Texas defense as they stormed their way to a 16-4 run, tying the game at 34 a piece at the 12:51 mark. The Horned Frogs forced four Texas turnovers during this run, making Texas hesitant to pass the ball inside.

“Coach told us it was going to be a dogfight unless we came out of the gates and we didn’t come out of the gates,” McGee-Stafford said. “We kind of let up on our defense and weren’t rebounding like we should have.”

For a team that’s lacked resiliency this season, Texas didn’t quit as it followed the TCU run with a 15-4 scoring run of its own. Empress Davenport, who turned 19 years old Tuesday, was the catalyst of this run, scoring seven of her 15 points in this six-minute interval.

“The coaches have been coaching me through each situation,” Davenport said. “The games and practices have helped me grow as a person.”

In addition to its strong defensive performance, Texas outrebounded its opponent for the 20th time this season, besting TCU 47-28 on the boards. McGee-Stafford led the team with 12 rebounds to go along with her 15 points, giving her a double-double for the 12th time this season.

As the season nears its end, the Longhorns have to be pleased with the progression the team has made in playing consistently for a full forty minutes.

“Our freshmen have had way too many minutes for us to be making excuses about mistakes they are making or things that they do wrong,” Aston said. “They are feeling more comfortable with the expectations of our coaching staff and of the Big 12.”