Some organic foods may be worth the extra money 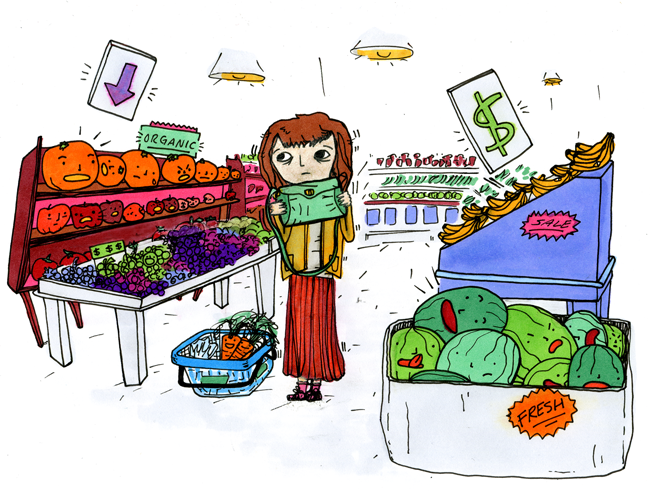 While most college students cannot afford to make regular grocery trips to stores like Whole Foods or Central Market, there are several organic products that may be worth the extra dollars from time to time.

According to the 2012 guide, apples rank as the dirtiest fruit in terms of pesticide exposure. Other products on the “Dirty Dozen” list include grapes, strawberries and potatoes.

However, the increased risk of pesticide exposure should not deter consumers from purchasing products on the EWG’s “Dirty Dozen” list. According to Chelsea Cappelle, vice president of the Texas Nutrition organization at UT, it is more important to have a balanced diet of fruits and vegetables than exclude certain items for being high in pesticides.

“If I’m buying any of those products [on the “Dirty Dozen” list], I definitely try to buy organic,” Cappelle said. “However, I am a college student on a tight budget so I wouldn’t necessarily buy only organic of those listed.”

Generally, the rule of thumb for deciding which organic foods to buy is based on whether or not the skin of the product is going to be consumed, according to Carly Reed, president of Texas Nutrition.

“A good general rule is that if the food has a peel you are going to remove — like bananas, oranges and avocados — then you don’t need to buy it organic,” Reed said. “Most of the bad stuff is found on the outside of the product, anyway.”

According to Reed, research is still unclear on the specific health benefits of buying organic foods.

“There are so many contributing factors like genetics, family history, environment, lifestyle, etc., when it comes to someone’s health that it can be difficult to isolate and measure its connection with eating organic versus non-organic,” Reed said. “We have to wait for the research to catch up at this point.”

While the research on health benefits is a bit ambiguous, Cappelle said there are external benefits to purchasing organic foods.

“It helps support farmers, the environment and animals by reducing the level of chemicals and pesticides that are used,” Cappelle said. “And you won’t be consuming as many chemicals and additives that non-organic foods have.”

According to the Environmental Protection Agency, the ingestion of pesticides can cause health problems like birth defects, nerve damage and cancer. These problems are dependent upon how toxic the pesticides being ingested are, and how many of them are consumed.

However, the EPA has several measures in place to ensure the food humans consume does not contain potent levels of pesticides — even food that is conventionally grown.

“Personally, I feel it’s much better to be eating a healthy diet of fruits, vegetables, lean meats and whole grains, whether they are organic or not,” Cappelle said. “If you can afford organic food, that’s an added bonus, but if you can’t afford organic foods currently, then that shouldn’t stop you from buying non-organic, healthy foods.”