Burning Question #2: Who will replace Kenny Vaccaro at safety? 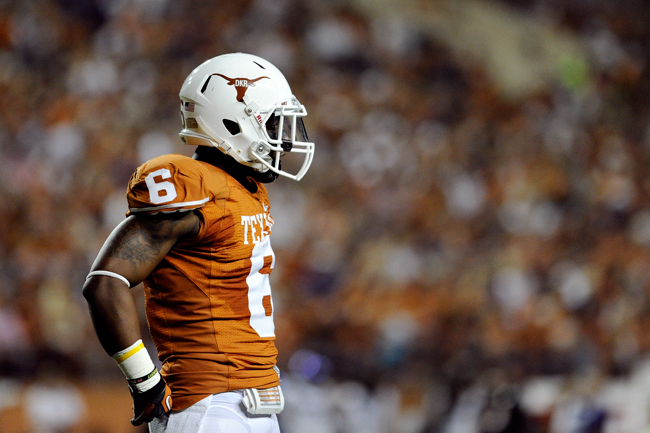 Quandre Diggs stands during the TCU game in Demember. The cornerback is one of several players on the Texas defense who could take over at safety with the loss of Kenny Vaccaro to the draft.  " />

Quandre Diggs stands during the TCU game in Demember. The cornerback is one of several players on the Texas defense who could take over at safety with the loss of Kenny Vaccaro to the draft.

As Kenny Vaccaro anxiously anticipates the NFL draft, Texas deals with the tough task of replacing him.

Kenny Vaccaros, after all, don’t come along every day.  The quickness, consistency in coverage and versatility the senior safety yielded provided a major asset for the often sluggish Texas defense this past season.  He could hit hard, move his feet and execute a physical game.

Beneath an array of tattoos on his arms was genuine tackling talent: In his 51 career games, Vaccaro had 264 tackles and led the team in tackles in his senior season.

As he departs for an NFL career, Texas must address a burning question: Who can replace Kenny Vaccaro?

It’s a question both Mack Brown and defensive backs coach Duane Akina have been addressing as spring practice commenced.

“We had a good discussion about that for about the last 10 days, and [Duane is] going to work them all,” Brown said at his press conference last week. “We got Sheroid Evans starting out at corner. But Quandre [Diggs] can play safety. He can play corner. And Duane has got to find his best five because of nickel.”

Dubbed “Munchie” for his hearty childhood appetite, Evans will likely be hungry for more playing time in his junior year. He played as a reserve defensive back and on special teams last season, missed four games with a leg injury and ended the season on a high note with a tackle in the Alamo Bowl.

Evans played 13 games as a freshman, notching eight tackles and a fumble in his first year on the team. His highlight performance came in the Holiday Bowl in 2011, as he helped the defense pressure Cal, holding them to a mere seven rushing yards. If he can continue to assert his influence and stay healthy in 2013, Evans could be a viable option to fill Vaccaro’s spot.

Other candidates include Adrian Phillips, who will enter his senior season with 15 career starts after playing in all 13 games last season, upping his consistency as the year progressed. Then there’s Mykkele Thompson, whose resume boasts experience on special teams and as a safety. Another possibility is Josh Turner, who hasn’t missed a game in the past two seasons and made his first start against Baylor in 2012.

But perhaps the most intriguing is Quandre Diggs, a cornerback with 24 career starts and eight interceptions who seems to have enough versatility to step into Vaccaro’s shoes.

“Quandre can play safety, he can play corner,” Brown said. When Adrian was out some of the bowl practice, Quandre got a good week at safety in there.”

If Diggs can make the leap from cornerback to safety, as Brown believes he can, the gaping hole Vaccaro leaves won’t be so wide. And while Vaccaro certainly won’t be easy to replace, Texas has a string of players ready to step up and fill the slot he left.