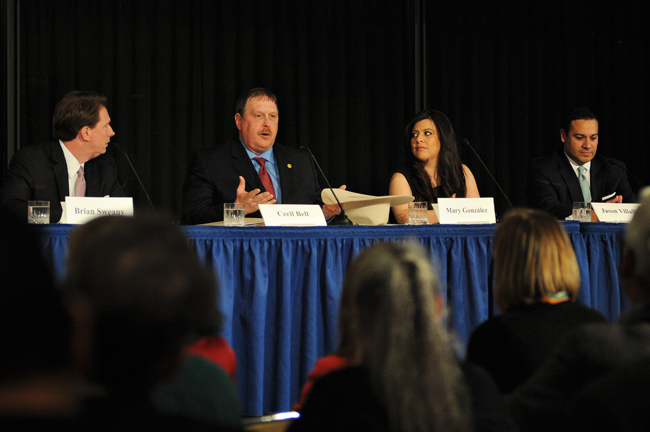 Representatives of the state legislature discuss the future of Texas at the LBJ Library Wednesday evening. The parties discussed the issues facing the legislature in the 83rd session and answered questions from the audience and a reception followed. " />

Representatives of the state legislature discuss the future of Texas at the LBJ Library Wednesday evening. The parties discussed the issues facing the legislature in the 83rd session and answered questions from the audience and a reception followed.

The issue of public education policy dominated the conversation Wednesday evening at the Lyndon B. Johnson Library where a panel of four members of the Texas Legislature addressed prominent issues facing Texas.

Rep. Mary Gonzalez, D-El Paso, was the first to spark the debate of public education when the moderator, Brian Sweany, senior executive editor at Texas Monthly, inquired about how she felt in her first session as a representative.

“I think what surprised me is that we haven’t addressed public school finance,” Gonzalez said. “We have asked the governor to make it an emergency item.”

Both Gonzalez and Rep. Mark Strama, D-Austin, addressed their concern about the dramatic cuts from public education during the previous session.

“I agree there needs to be a complete overhaul on education,” Gonzalez said. “We need to bring technology into the classroom and a curriculum that engages students.”

While Rep. Jason Villalba, R-Dallas, admitted that he was for restoring some of the cuts, he also said that money and government is not the answer, placing emphasis on a comprehensive reform.

“What I’m saying is we need to focus more on alternatives rather than solely looking into money.”

After Gonzalez visited high schools in the El Paso district and informed them of the $5.4 billion cut, she said she could see the look of awe in their faces.

“Why would they want to engage in a system that they feel has let them down?” Gonzalez asked.

Audience members were also part of the discussion. Joanne Richards, former assistant dean of the College of Pharmacy, said students have different interests, motivations and excitements.

“So the question becomes how do you provide excitement and curiosity and teach them things they don’t want to learn?” Richards said.

Rep. Cecil Bell, R-Magnolia, also sat on the panel. Texas Monthly and the Center for Politics and Governance at the LBJ School of Public Affairs hosted the event.

All four representatives said there was a change in tone from last Legislation when Sweany asked about partisanship. Strama and Villalba said legislators started a new tradition of wearing purple on Thursdays, as a symbol of harmony.

“My good friend Ron Simmons came up with the idea,” Villalba said. “There was a desire to come together and we all want to make this state stronger and better.”