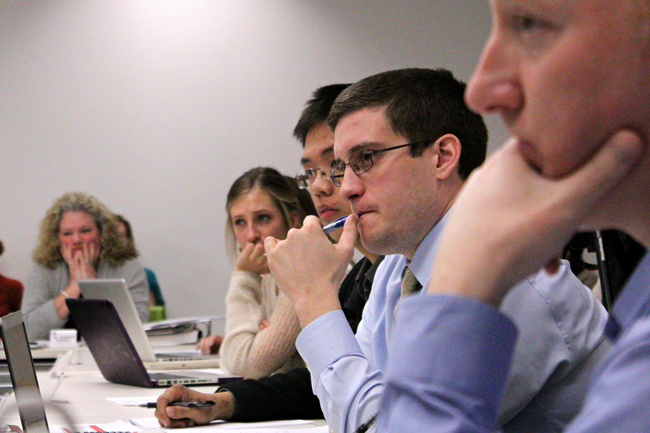 In the face of serious financial shortfalls projected for the end of this fiscal year, the Texas Student Media Board voted to maintain the five-days-per week print schedule of The Daily Texan while halving wages for all staff and also reducing tuition reimbursements for student managers by 50 percent.

The board also agreed to invest in a new marketing position and increased the administrative and professional salary budget by $30,000. The raise was attributed to a reorganization within Texas Student Media that gave each employee more responsibilities. The budget originally submitted to the board for consideration reduced the print schedule of The Daily Texan to four days a week.

Daily Texan adviser Doug Warren announced he was resigning effective in June because of several factors including an ongoing frustration with what he called the transitory and unstable leadership of the board.

“Much of my ongoing frustration stems from the fact that none of this is really new — we’ve been dealing with a version of this basic problem since I walked in the door three years ago,” Warren said. “Revenue is going down, and we’ve responded by making a variety of different cuts, down to the point of cutting into the bone of the operation. We need to step back and create a vision for how we’re going to go forward and that hasn’t been done.”

The board oversees the operation of five media properties, including The Daily Texan, The Texas Travesty, KVRX, TSTV and the Cactus Yearbook. Seven of the 10 voting members on the board have held their positions for less than six months.

Katherine Swope, psychology senior and editor-in-chief of The Texas Travesty, said while she was glad her publication was not having its production schedule cut in half, she felt the board only addressed short-term questions and failed to create a long-term fiscal plan. The originally proposed budget recommended reducing the Travesty’s publications from seven issues per year to three issues per year.

“I’m very happy our print was retained, and I do feel a physical presence is necessary to our survival on campus, but we did not come to a solution for how we’re going to move ahead in a viable way,” Swope said. “We didn’t make any progress.”

Though no specific long-term financial steps were determined, Paepin Goff, board president and communication studies senior, said she would describe the meeting as a success based primarily on its tone.

“We went in with the hope that we could have everyone leaving happy, and that isn’t always possible, but the majority of people who wanted to say something were able to do so,” Goff said.

Board director Jalah Goette said she felt the meeting was a success in part because of the cooperation of the student managers of the various media entities.

“I’m really pleased with the board’s decision,” Goette said. “I’m not a fortune teller — I don’t know how industry changes will impact us — but the board’s actions on Friday were a good step forward, and I think the students are very interested in ensuring the organization is successful.”

One major discussion point was the possibility of alumni support as a reliable source of revenue. Several former Daily Texan staffers raised money to place an ad in Wednesday’s edition of the newspaper, circulated an online petition and opened a Twitter account under the name “Friends of the Texan.” In a few days, the group raised several thousand dollars.

Dave Player, board member and law student, asked if this support was a realistic source for short-term revenue.