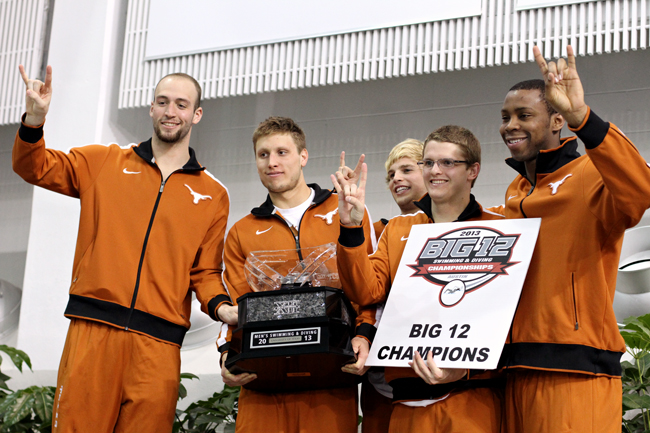 Both of Texas’ swimming and diving teams took home the team Big 12 championship Saturday after four days of competition. It is the men’s 17th Big 12 title and the women’s 11th.

The No. 1 Texas men’s team walked away with 985 points, 187 more than second-place TCU and 197 more than West Virginia, who took third place with 788 points.

“We always want to go significantly faster than we’d been swimming. If we do that, that usually takes care of winning,” Reese said.

Texas took first in every event except one and was able to put itself in good position for the upcoming NCAA Championships later this month.

Seniors Cole Cragin and Dax Hill, along with sophomore Tripp Cooper and junior Madison Wenzler, set the tone for the meet with a win and an automatic NCAA qualifying time of 1:25.23 in the 200-yard medley relay.

In the 1650-yard freestyle, senior Michael McBroom destroyed the Big 12 meet record in 14:33.53, the fastest time by anyone in the country this season.

Cooper controlled the 100-yard butterfly in 46.85 seconds, fast enough for a NCAA “B” cut, while senior Austin Surhoff produced a time good enough for an NCAA “B” cut in the 400-yard and 200-yard individual medley.

“Everybody is learning,” Hill said. “They are taking it all in, and they knew what to work on these next couple weeks before NCAA’s.”

The ninth-ranked women crushed the competition on the last day, pulling 475 points ahead of second place West Virginia, who scored 576 points. TCU rounded out the top three with 574 points.

“I know it looked like we ran away with it,” Capitani said. “But we did have some good competition and some races where we competed against ourselves. I’m happy we raced hard and came through every night.”

Texas’ only three individual title losses came from Rachael Burnett of West Virginia and the 200-yard butterfly that no Longhorn participated in. Texas swept every relay and each secured NCAA automatic-qualifying times.

Senior Laura Sogar broke the Big 12 Championship record in the 200-yard breaststroke with a time of 2:05.25, good for the second fastest time in school history.

“It is really exciting,” Sogar said. “This is my last race at this pool. I am happy to get the record and end on a really good note.”

Senior Shelby Cullinan won her first title on the platform diving event, as did freshman Meghan Houston on the 3-meter diving board. Redshirt junior Maren Taylor rounded out her career with her third title on the 1-meter board.

“They’re excited to race some people and do what they can do under pressure,” Capitani said. “We’re looking to have some great relays and some standout performances individually. It’s time.”