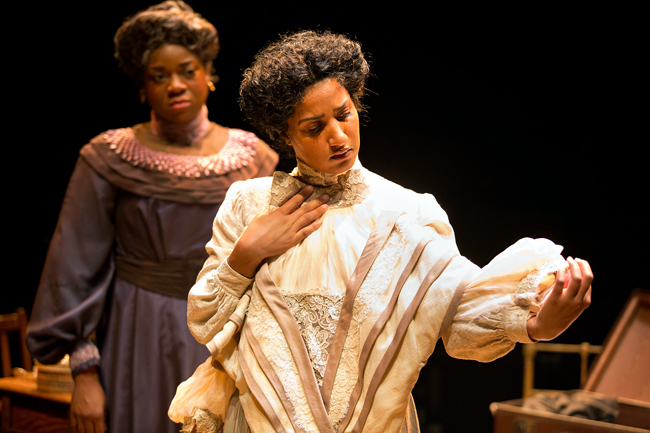 The UT theatre department’s production of “Intimate Apparel” focuses on the life of Esther Mills, an African American seamstress working in Manhattan. Esther has recently turned 35 and realizes that something is missing from her life as a ladies’ lingerie seamstress. She longs for love and marriage, and dreams of opening a salon to pamper African American women.

However, Esther’s luck seemingly changes as she begins a letter correspondence with George Armstrong, a laborer working on the Panama Canal. George eventually comes to New York to marry Esther and, little by little, the couple realizes they are not who their letters presented them to be.

“Intimate Apparel” opens with Esther at her sewing machine, creating unmentionables for yet another female acquaintance that has beat her to the alter.

“In terms of character, Esther is very different from me,” said Mykal Monroe, who is playing the lead role of Esther. “I’ve had to find a darker, more depressed avenue of my psyche, which at times is actually not that fun but is very necessary to accurately portray this woman.”

Monroe’s portrayal of Esther, while gravely serious at times, is anything but depressing. Esther may be mild-mannered and level-headed, but her secret ambitions really bring her to life.

Attachment to Esther deepens throughout the play, felt especially in the audible gasps of the crowd as Esther’s world begins to unravel.

The romantic tension between Esther and Mr. Marks, a Romanian Jewish immigrant who shares her love for fabric is equally stinging. In an age where we are taught that love will overcome all, the audience is forced to swallow the pill and accept that a marriage between these two people in 1905 is impossible.

“I love comedy, and this is not a comedy,” Monroe said. “With comedy, there is an interaction that I have with the audience that definitely feeds me in a way … It’s going to be much more silent than I’m used to in a live show. I feed off the laughs.”

Even with Monroe’s warning to the serious nature of the play, the tension is broken with plenty of laughs. The entire cast never misses a beat and is, most importantly, utterly convincing.

Making a story set in 1905 relevant to an audience in 2013 wasn’t as difficult as it sounds according to the play’s director, Melissa Maxwell.

“It’s because the play is set in a time when letter writing was the main form of communication,” Maxwell said. “What’s so funny is that email has brought that form of communication back. People will text rather than pick up the phone and call each other. People will often meet online and spend a little time getting to know each other through written words rather than face to face, or via the phone.”

While “Intimate Apparel” feels very 1905 with background ragtime music and corseted costuming, the use of video and strobe lighting warp the sense of reality created by the play. These surreal effects could have been a distraction but blend into the story and offer a break from the overwhelming despair of Esther’s story.

The intimate set design, with the audience seated on three sides of the stage, mere feet away from the actors at times, creates a voyeuristic fly on the wall feeling that heightens the audience’s engagement.

With such professional execution from the entire cast and the engrossing atmosphere created by the production team, UT’s “Intimate Apparel” will leave the audience reeling.