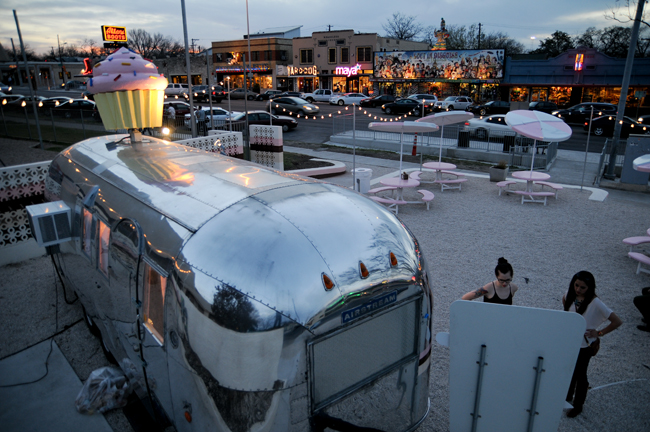 The Hey Cupcake! trailer stands at its new, permanent location on South Congress Monday evening. Unlike its former neighbors, some of whom remain uncertain as to where they will conduct business next, the trailer was able to stay in the immediate SoCo vicinity. " />

The Hey Cupcake! trailer stands at its new, permanent location on South Congress Monday evening. Unlike its former neighbors, some of whom remain uncertain as to where they will conduct business next, the trailer was able to stay in the immediate SoCo vicinity.

The iconic cornerstones of the food trailer lot on South Congress Avenue have abandoned their coveted positions, leaving nothing but a patch of matted grass behind.

The two trailers that formerly served as the borderlines to the miniature mecca of mobile eateries moved following a warning from SOCO ATX Development that the lot on South Congress will close sometime this year to make room for a new hotel. According to JC Gulledge, Mighty Cone employee, the only guarantee that was given to the trailers was that they would be able to stay through the end of South by Southwest.

The Mighty Cone’s early departure from the lot left a piece of prime food truck real estate open on the corner of South Congress and Monroe. However, the scent of fried avocados and coleslaw had barely left the plot of land before Justin Burrow’s yellow shipping container opened for business as Burro, a mobile eatery that serves gourmet cheese dishes in the form of sandwiches.

“How I came across this spot is I used to work for Mellow Johnny’s Bike Shop and Capital Sports and Entertainment manages that business, so obviously they’re interested in it,” Burrow said.

Burrow met with Jeffers over lunch and mentioned he was building a trailer business of his own. According to Burrow, Jeffers — who could not be reached for comment — offered to help him secure Mighty Cone’s spot because he knew the trailer would be leaving soon.

“To me, moving here was a no-brainer,” Burrow said. “It was the best location in the city to launch a food trailer.”

According to Gulledge, The Mighty Cone left the South Congress lot early to claim a spot in the Rancho Rio Eatery lot. The new West Campus lot extended their original Jan. 1 move-in deadline to Feb. 1 in order to accommodate the Mighty Cone.

“They’ve told us they were building this hotel for three years, but this company is definitely more interested in pursuing it than anyone else has been,” Gulledge said. “We wouldn’t have moved if we didn’t think they were gonna kick us off the lot.”

According to Gulledge and Burrow, the food trailers pay a lease to operate on the lot on a monthly basis. The cost of each lease varies by trailer.

“I’m going through March and I haven’t paid for April yet, so they’re letting us know if April’s gonna be available whenever April happens,” Burrow said.

Burrow said he has been pleased with the Burro’s success thus far, and has a new location lined up near Barton Springs for when the lot finally does close to the trailers.

“Here’s the irony, is they’re building a hotel because the draw to come to Austin, from a tourist standpoint, is partly because of South Congress food trailers,” Burrow said. “But then you boot them all off and build the hotel and that’s no longer part of the draw.”

Shane Carr is a tourist that a future hotel on the South Congress lot could one day serve. He chose to patronize the array of food trailers for lunch while in town on business from Philadelphia.

“It’s unique. I watch the Food Network and the Cooking Channel and the Travel Channel and they’re at these places all the time,” Carr said. “As of now, nothing like this exists in parking lots in Philadelphia. They’re either lined up around the street or are mostly near Penn and Drexel’s campuses.”

A petition urging SOCO ATX Development to preserve the trailer lot was started by Austinite Brian Nelligan in late October. Nelligan plans on sending it to the development company sometime soon.

“It’s hard to decide when to send it because every day it goes up a couple hundred votes,” Nelligan said.

“I grew up in Austin. I was born here and I’ve seen it change a lot over the years, and it’s always sad when you see something that’s a part of Austin’s identity get torn down for something generic,” Nelligan said. “I wish they would realize what a gem they have there and spend the money developing that more.”

In the meantime, the former veterans of the lot have since abandoned their posts. While the lot may not be empty until the last lease runs out, it seems as though the glory days of the South Congress food trailers have come and gone, with nothing but the possibility of a hotel in the future.