Lack of sleep among UT students an issue on campus 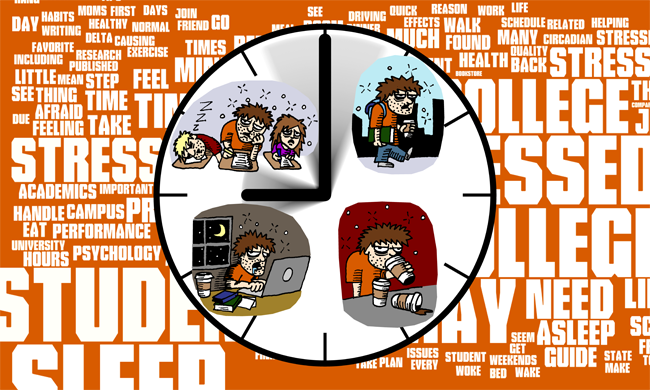 Sleep deprivation, a common problem on UT’s campus, can cause more problems during a test than being legally intoxicated.

In the 2012 National College Health Assessment, which was released earlier this semester, 46 percent of UT students indicated that sleepiness interfered significantly with their daytime activities.

Laura Ebady, Counseling and Mental Health Center psychologist and outreach coordinator, said obtaining less than the recommended seven to eight hours of sleep can cause an inability to focus in the classroom setting.

“A study by psychologist David Dinges suggest that when students go without sleep their performance on tests was actually worse than students who were legally intoxicated,” Ebady said. “One thing he found was that students consistently overrate their ability to concentrate and to perform academically when they don’t get enough sleep. So a lot of students are in fact impaired but don’t recognize it.”

Alongside reduced cognitive functions, Ebady said sleep deprivation can cause other mental-health issues including anxiety and depression.

“Those are some of the most common concerns that bring students in [to the center],” Ebady said. “Of course when people are sleep deprived, they’re probably not going to be at their best so that could lead to added conflict internally and externally.”

Theatre studies senior Megan Thompson said she does not see sleep as a priority because she feels she loses productivity if she sleeps too much.

“I’m here in college not to sleep but to do well in all of my classes so I try to sleep as much as I can,” Thompson said. “I know it’s good for you, but if it comes between school work and my organizations that I’m in, they come first. School, job, extracurricular [activities], then sleep.”

Susan Hochman, assistant director of University Health Services, said sleep deprivation is a problem on the 40 Acres. Sleep is one of the top two health-related impediments to academic performance, according to Hochman.

He said there are many physical downsides to the lack of sleep among college students that could cause short and long-term issues. 68 percent of students said often they felt tired, dragged out, or sleepy during the day for more than three days out of the week they were surveyed.

“Sleep deprivation can really impair the ability for your immune system to function normally and maybe more susceptible to sickness such as the common cold,” Hochman said. “That is something that could keep them out of class. There are relationships between sleep deprivation and obesity, diabetes, cardiovascular disease and other behavioral components.”

Government sophomore Samayia Sneed said she maintains her energy throughout the day by taking naps.

“Those naps give me the energy I need to do what needs to be done throughout the day,” Sneed said. “After my meetings and work I take a nap in preparation for studying. It’s my little energy booster until I crash at 2 or 3 [in the morning].”

“We encourage short 20 to 30 minute naps,” Hochman said. “There is actually some research that shows short naps can boost your energy levels and your ability to focus and concentrate.”

Hochman said there are countless ways for students improve their sleeping habits and be happier and healthier.

“Students should create an environment where it contributes to good sleep,” Hochman said. “Use your bed for the purpose of sleeping and not for the purpose of studying. Having consistency with sleeping habits and avoiding caffeine, alcohol, nicotine, strenuous activities and eating three to four hours before bedtime — these are all things that can contribute to poor-quality sleep or not being able to sleep.”