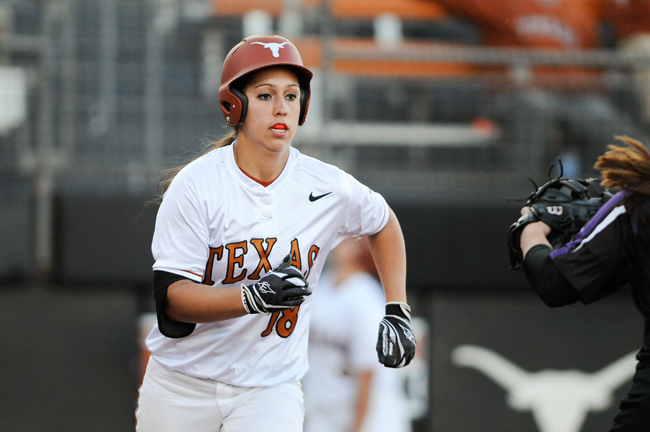 When No. 13 Louisiana scored on a double steal last Saturday, the Longhorns didn’t blink an eye. Taylor Thom, Kim Bruins and Mandy Ogle returned the favor with back-to-back-to-back home runs in the bottom of the inning. No. 5 Texas won the match 7-2 and will meet the Ragin’ Cajuns in Austin for a doubleheader Wednesday.

“It was significant [to win Saturday],” head coach Connie Clark said. “It was exciting to me knowing that we’re going to see them three times in one week. It’s not in the same weekend, but it’s as close as we get to a conference series or NCAA Tournament super regional setup.”

Texas’ 3-2 performance at the Citrus Classic brought it to a 19-3 season record, 3-1 against ranked opponents. The pitching staff allowed just three hits in 12 opportunities with the bases loaded, and the Blaire Luna-Mandy Ogle combo remained strong. Against Louisiana, Ogle complemented Luna’s 11 strikeouts by throwing out a runner stealing for the fourth time this season. Louisiana gave the Longhorns a peek at three pitchers.

“That’s tremendous for us in regards to getting to their bullpen because our hitters are hot,” Clark said. “That gives us an opportunity to have a good game plan going into a doubleheader.”

Ready to enter this game plan, Torie Schmidt emerges from the weekend with a .333 batting average, up from .209 last week. Gabby Smith boasts claims as Texas’ leading hitter in the tournament, though she lost her career-high six game winning streak. And Thom, who first tied the game with a homer, finished strong with the game-winning run against the Ragin’ Cajuns. The deep team looks to trump Louisiana twice Wednesday, in hopes of its first four-game winning streak against top-20 foes since 2007.

The first match begins at 5 p.m. at McCombs Field.