Burning question: Is 2013 the year Texas Football can return as a national championship contender? 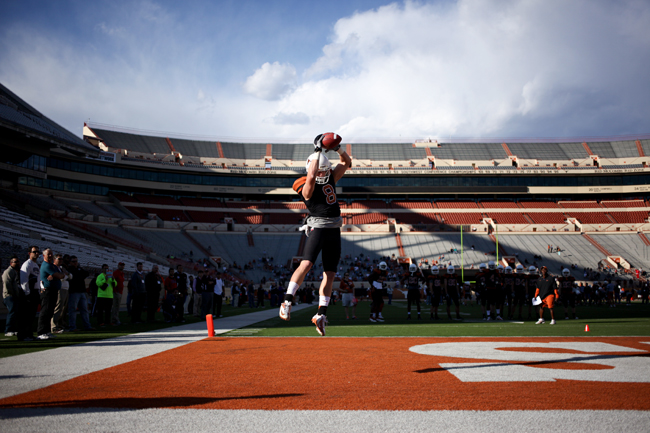 Rising junior Jaxon Shipley makes a leaping catch at one of the Longhorn’s open spring practices last week. Shipley is one of 19 returning starts who could provide Texas the tools it needs to fight for a national title.  " />

Rising junior Jaxon Shipley makes a leaping catch at one of the Longhorn’s open spring practices last week. Shipley is one of 19 returning starts who could provide Texas the tools it needs to fight for a national title.

Editor’s Note: This is the fifth of five burning questions we will ask as spring practice kicks off: Can Texas put together a national title run in 2013?

And so, the burning question on the minds of coaches, players and fans this spring is this: Is 2013 the year Texas claims national title No. 5?

The numbers seem to be in the Longhorns’ favor. Texas boasts 19 returning starters, more than any team in the country, with 10 on offense, nine on defense.

After several seasons of quarterback flip flops, Texas has found a solid starter in David Ash. While Ash’s performances were sometimes varied in 2012, he steadily improved and thrilled with a comeback performance in the second half of the Alamo Bowl.

Texas is also one of only two other Big 12 teams bringing back a starting quarterback in 2013, meaning Ash is one of the key faces to watch as he takes the reins and expands his leadership capabilities as a junior. Texas Tech, Kansas State, West Virginia, Oklahoma and Baylor will all return with fresh quarterbacks in the fall.

“He’s confident,” senior defensive tackle Chris Whaley said of Ash. “He is coming out and playing and running the offense like a leader. That’s what we need. He never really said much, but now he is stepping up and being a leader.”

Texas also has a new up-tempo offense, powered by Ash and offensive coordinator/quarterbacks coach Major Applewhite. Head coach Mack Brown envisions the quick strategy will allow the Longhorns to wear down opposing defenses as they did against Oregon State. The strategy was used previously with Vince Young and also when Applewhite himself was suited up in uniform.

“There’s a lot of good players on this football team,” Ash said of playing up-tempo. “We want to get them in the open field and let them run with the football. I think it’s helping the defense get used to playing at a fast tempo. I think it’s a win-win.”

Co-offensive coordinator/wide receivers coach Darrell Wyatt also has plenty to work with. Mike Davis is striving for 1,000 receiving yards in a season after tallying 939 last season and leading the team in receptions. Jaxon Shipley also had over 50 receptions in 2012.

The offensive line will have a returning batch of seniors as well as a string of new additions from its recruiting class with star potential. With Kenny Vaccaro’s departure comes a bevy of players ready to step in and fill the safety slot, including Adrian Phillips, Sheroid Evans and Quandre Diggs.

With all that in mind, Mack Brown is confident this could be the Longhorn’s year to shine.

“We have got a chance to get the program back to a top level,” he said at a press conference before the start of spring practice. “And with what’s happening right now, keep it there.”

The outcome of the season rests on many factors: Ash’s ability to lead effectively, the up-tempo offense’s capability to execute, solving the tackling problem, staying healthy.

But the man in the front seat seems to believe that it can be done. It’ll just take some work.

“We are on the brink, and we just need to take this next step to get Texas back with the elite,” Ash said.

Watch the full interview with David Ash: Why does Vince Young call him Ashley?