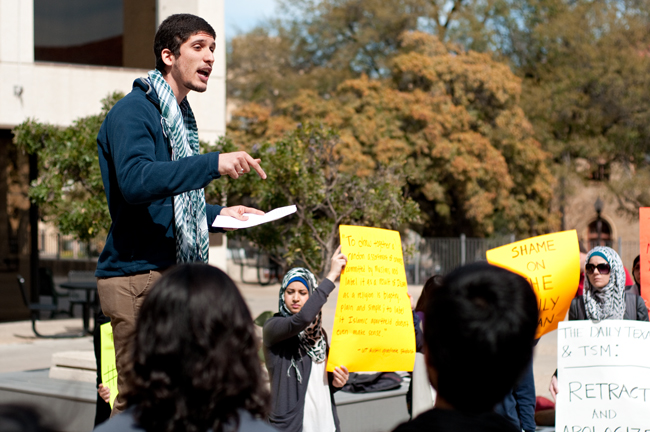 Ehssan Faraji, biomedical engineering senior, speaks to students gathered in protest of Islamophobia because of an ad that appeared in Monday’s issue of The Daily Texan on Wednesday afternoon. The protested advertisement implied that Islamic violence was resulting in deaths. " />

Ehssan Faraji, biomedical engineering senior, speaks to students gathered in protest of Islamophobia because of an ad that appeared in Monday’s issue of The Daily Texan on Wednesday afternoon. The protested advertisement implied that Islamic violence was resulting in deaths.

A group of students protested outside Texas Student Media on Wednesday demanding a public apology from The Daily Texan regarding an advertisement promoting anti-Islamic sentiments that ran on Monday.

The full-page advertisement ran on the back page of The Daily Texan featuring photos of six deceased women overlaid with images of rifle crosshairs. The images included explanations about the deaths, alleging that all were a result of Islamic violence. The ad was paid for by the David Horowitz Freedom Center, a national organization that directly opposes “the radical left and its Islamist allies,” according to the organization’s website.

A group of students, unaffiliated with any one collective organization, gathered at the Cronkite Plaza outside the Hearst building where Texas Student Media is housed. The group held signs and listened to student and faculty speakers expressing disgust with the advertisement, ultimately demanding a public apology on behalf of The Daily Texan’s staff.

Saif Kazim, historian for UT’s Society for Islamic Awareness, facilitated several parts of the protest and led the group in chants between speakers.

“Today’s gathering invokes a rallying together as a collective body of concerned students to send a powerful message that such bigotry has no place on our campus, or anywhere in the world,” Kazim said.

Biomedical engineering senior Ehssan Faraji said the turnout of approximately 100 protesters was positive on such short notice. The protest was organized Monday night through a Facebook event, Faraji said.

“We saw the ad on Monday, and we were immediately concerned and very disgusted and we decided that night, actually, to hold some sort of protest,” Faraji said. “It was just some friends that got together.”

The Daily Texan’s editor-in-chief Susannah Jacob and managing editor Trey Scott addressed the protesters together. Jacob personally apologized for the offense caused by the advertisement, but said she commended the protesters for their outspoken stance against racism and hate on UT campus.

Jacob published an editorial in The Daily Texan on Tuesday explaining how each potentially controversial advertisement is voted on by student editors and managers with the majority ruling on whether or not to run the ad.

“I think when we talk about the future of The Daily Texan and moving forward, there is room to grow and to build a dialogue to create a student newspaper that does not only function to keep hate out, but functions to directly combat these types of arguments and these ideas,” Jacob said.

Scott, who was one of the student editors who voted to run the advertisement, said he did so because he felt his personal disgust with its content was not enough to warrant holding the ad on First Amendment grounds. Scott’s explanation was met with booing by several members of the protest.

“I think that there should be an institutionalized response against an organization [whose] sole purpose is to institutionalize hate,” Scott said. “At the next Texas Student Media Board meeting in April, I am going to propose an absolute ban on any advertising from David Horowitz and his foundation.”