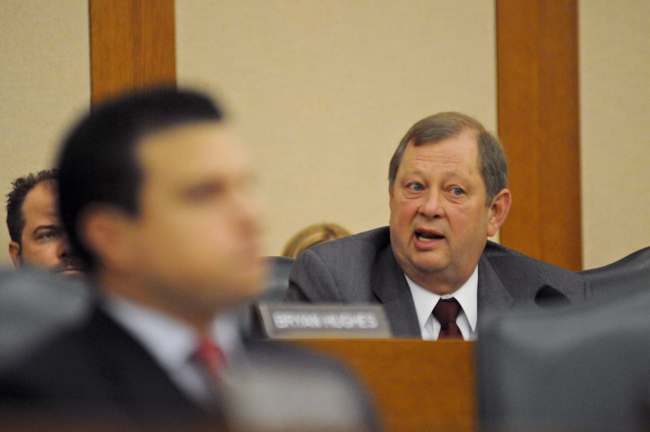 Rep. John Otto speaks during the the House Appropriations Committee on Thursday morning.

The Texas Legislature could boost TEXAS Grant funding to historical levels if it follows recommendations unanimously approved by the House Appropriations Committee on Thursday.

The committee approved adding $150 million for the TEXAS Grant Program to the Legislature’s preliminary budget proposals. The initial proposals would have allocated $559.5 million to the program for the 2014-15 biennium, the same amount approved during the previous legislative session for the 2012-13 session.

Rep. John Otto, R-Dayton and chair of a subcommittee of the House Appropriations Committee that deals with higher education funding, said the increase would allow the program, which serves students whose expected family contribution to their cost of attendance is $4,000 or less, to serve more students statewide.

“This is not only the largest biennium-to-biennium increase ever in TEXAS Grants, it is also the highest total ever in the program, which should cover approximately 87 percent of all eligible students,” Otto said.

The funding levels recommended by the committee Thursday for TEXAS Grants fall short of that request. However, when $15 million in donations to the program are factored in, the total amount available to the program equals $724.5 million, exceeding the coordinating board’s request.

The program serves 8,449 students at UT. The Legislature allocated $50.7 million to eligible students during the 2012-13 biennium, according to the Office of Student Financial Services.

The committee also recommended increasing all formula funding to state higher education institutions by 3 percent. The state uses formulas that include enrollment and graduation rates among other factors to determine the state’s contribution to universities and colleges throughout the state.

Mary Knight, associate vice president and chief financial officer, said she does not know how the increase in formula funding will impact the University, but she doubts the increase will make up for past budget cuts.

Under preliminary proposals, the Texas House of Representatives would allocate $478.8 million in state general revenue funds to the University during the 2014-15 biennium, while the Senate would allocate $483.8 million over the biennium. Both of the initial proposals are $9 to $14 million less than the $492.5 million the Legislature allocated to UT in the last biennium.

“When we get the actual documents that show the appropriations by institution, we will know how we’ll be affected,” Knight said.

Published on March 8, 2013 as "TEXAS grant budget up for substantial increase".