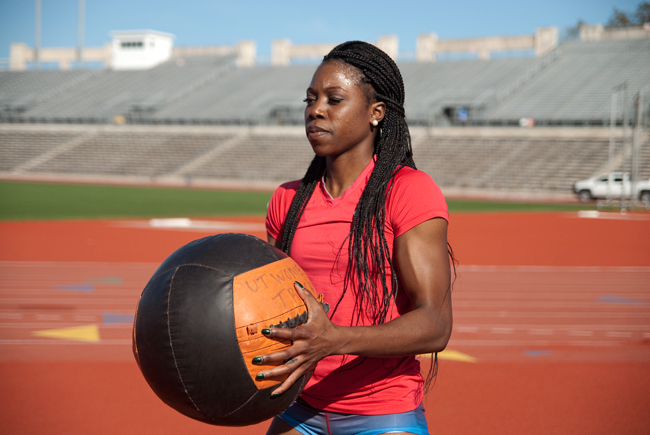 Junior Christy Udoh brings Olympic experience and heart to a solid women’s track and field program after competing for Nigeria in the 2012 games. Udoh has been named to the Big 12 First-Team 10 times in her career and looks to add more accolades this season.

It was just last August that junior Christy Udoh found herself racing alongside the world’s premier sprinters at the 2012 Summer Olympics in London.

Udoh was one of 21 current and former Longhorns to compete in the Games, on a list that includes Texas legends like Kevin Durant and Sanya Richards-Ross. Unlike the majority of her fellow Longhorns however, Udoh did not sport the red, white and blue of the U.S. Instead, she donned the green and white colors of Nigeria, the country where both her parents were born and where she shares dual citizenship.

“It dawned on me that if I wanted to be on an Olympic team, I would have to beat out a lot of Americans to do so,” Udoh said. “I was glad to have another nationality to run for, so I contacted someone from Nigeria and they wanted me to run for them.”

In fact, the African country had been pursuing Udoh since she was in middle school, wanting the talented sprinter to run for the nation that holds her roots. Udoh would go on to qualify for Nigeria’s 4X100-meter relay team as well as a spot in the 200-meter dash.

What Udoh achieved by getting to the London games has changed her career and life forever. And despite not medaling at the Olympics, the young sprinter has never taken the experience for granted.

“That was the biggest thing in life that I ever accomplished,” Udoh said. “Now when I train for my next Olympics I know what to do and what not to do.”

Udoh also holds the school’s eighth fastest mark ever (22.72) in the outdoor 200-meter dash, a time she clocked last summer at the NCAA Outdoor Championships.

And while NCAA competition is no laughing matter, it does not compare to the level of athleticism present at an Olympic event. Through Udoh, the Longhorns have found experience that is hard to come by. What the Olympian has been able to provide is track and field wisdom at its highest level.

For the Texas squad and its interim head coach Rose Brimmer, it is that type of intangible that makes her special to the team.

“She’s gained some wisdom and some knowledge about the level of what it takes to be a scorer not just on the Big 12 level or the national level but the Olympic level,” Brimmer said. “[She] went against the best, so [she] doesn’t have to be afraid of anybody.”

Udoh and the No. 7 Longhorns will compete this Friday and Saturday in Fayetteville, Ark., at the NCAA Indoor Championships. It will be the fourth time the team has visited the Randal Tyson Track Center in 2013. The venue has treated Texas well this year, with 10 Longhorns combining for 13 career-best marks there.

Udoh will compete in the 200-meter dash Friday beginning with semifinals at 7:35 p.m.

“I feel like everyone is going to bring their ‘A’ game because everyone wants to be a winner,” Udoh said. “As for me, I’m going to push myself this weekend with a goal of doing something great.”