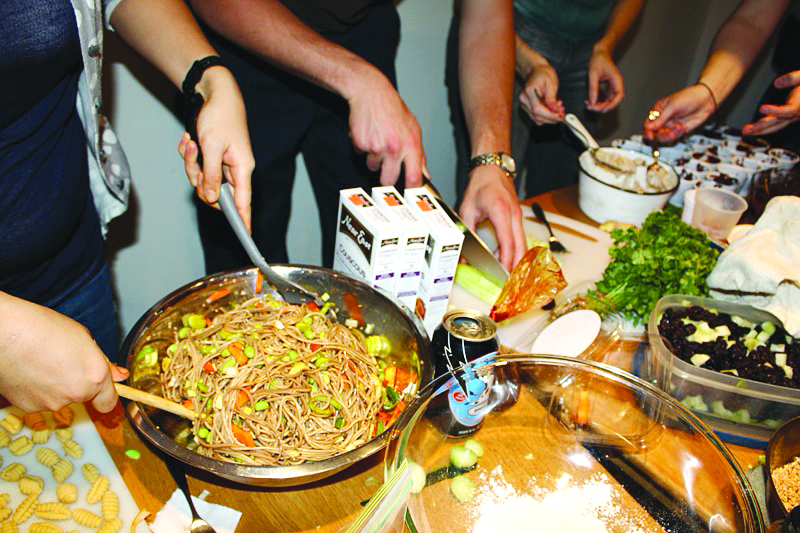 Chaos Cooking involves over more than strangers cooking together in one home and enjoying the results. Events like these are increasing in popularity at SXSW (Photo courtesy of Chaos Cooking).

During South By Southwest, tourists crowd every restaurant in Austin in search of sustenance. Every bar, dive, diner and grill bursts at the seams.

As a result, a new kind of eating experience has arrived just in time for SXSW. It’s called Chaos Cooking.

Chaos Cooking events are relatively simple. A family opens up its home to 100-plus strangers who prepare one course in whatever working space they can find in the house. Once the cooking is done, every guest is welcome to dig into whatever they please. It is a 100-course meal, free of charge. Basically, it is eating out by eating in.

The first Chaos Cooking event was held in Brooklyn, N.Y., as a birthday celebration in December 2009. The host, Joe Che, wanted to revamp the warm, homey feeling created when family and friends come together to eat for the holidays. It was an instant success and now Chaos Cooking parties are hosted nationwide.

“At the first event there were 18 of our closest friends in our small Brooklyn kitchen, and it felt and smelled like I was home for the holidays,” Che said in a press release. “I had no idea that it was going to grow into its own community, but it just took wings of its own.”

The Brooklyn Brewery is set to host a marketing event for SXSW called The Austin Mash. The Austin Mash is a five-day affair starting March 6, and its first event is a Chaos Cooking meal. They are keeping the location a complete secret until right before the dinner. Then they will let strangers go wild with food in one small home.

The Austin Mash is just one of many stops around the country for the Brooklyn Brewery. The profits of the events will benefit Slow Food USA, an organization that promotes sustainable food awareness and small, local farming worldwide.

According to its website, Slow Food USA is against the “industrialization of food and the standardization of taste.”

“We’re absolutely delighted to have the support of the Brooklyn Brewery as it launches its Mash tour,” said Richard McCarthy, executive director of Slow Food USA, in a press release. “Brooklyn Brewmaster Garrett Oliver has been a Slow Food supporter for a long time and we’re looking forward to the celebrations in the various local communities.”

Journalism freshman Erin Hopkins is planning on attending SXSW, but does not think she will ever participate in Chaos Cooking.

“Honestly, it sounds like ‘The Real World: Kitchen Edition,’” Hopkins said, “One hundred strangers randomly cooking together in someone’s home seems bizarre to me.”

For some, Chaos Cooking is an interesting way to make friends and eat for free. For others, it’s downright crazy and mildly frightening. SXSW is nothing if not chaotic. It seems only fitting that the cooking is deranged as well.