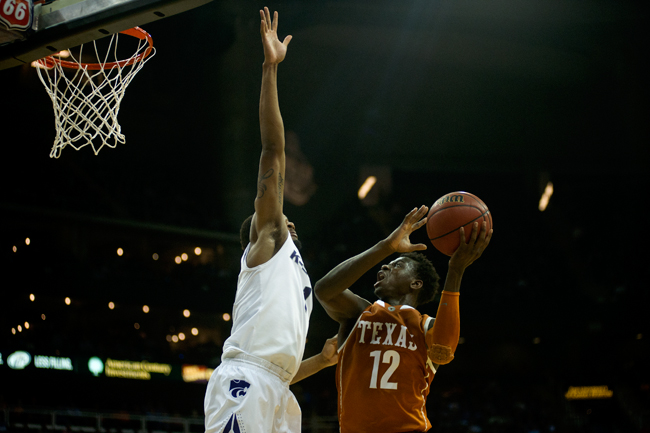 KANSAS CITY — The Longhorns were sent home Thursday evening after falling to Kansas State 66-49 in the quarterfinals round of the Big 12 Championship tournament. Texas dropped all three contests against the Wildcats this season.

“Kansas State’s really good. I mean, really, really good. I love what they’re made up of,” Texas head coach Rick Barnes said. “They’re really good. And I thought we did some things early, but we helped them too much.”

For the second night in a row, sophomore Julien Lewis led the Longhorns in scoring with 13 points off the bench. Lewis was perfect at the line and once again, productive beyond the 3-point arc, going 3-for-6 on the night.

Texas saw little production from its leading man as Myck Kabongo failed to make a shot until getting two free-throws in the last 40 seconds of the game. Guard play was poor all night as both Kabongo and sophomore Sheldon McClellan were ineffective from the field.

“They did a good job. I still think we got a lot of shots we wanted,” Kabongo said. “We got in there and just not finishing plays. We need everyone to play well, and that’s what it takes to win, and we didn’t do that.”

The Longhorns got going fast Thursday night. The Longhorns capitalized on sloppy performance by the Wildcasts en route to a 7-1 lead. The lead didn’t last long as the Wildcats quickly tied the game at four minutes into the game, and didn’t trail the rest of the night.

Both teams shot 42.3% in the first half, but the Longhorns struggled to keep up thanks to a high turnover ratio. At the half, the Longhorns led Kansas in turnovers 7-3. Texas committed 15 turnovers on the night. The Wildcats went into the locker room up 34-28 at the half.

The Longhorns came out in the second half cold, unable to mount any kind of a rally. The Longhorns took the score to within five, but that is the closest they got as the Wildcats quickly jumped to a double digit lead, leading by as much as 19.

The Longhorns essentially needed a Big 12 tournament championship in order to hear their name called during Selection Sunday for the NCAA tournament. With the loss, the Longhorns will not compete in NCAA post season play for the first time in 15 years.