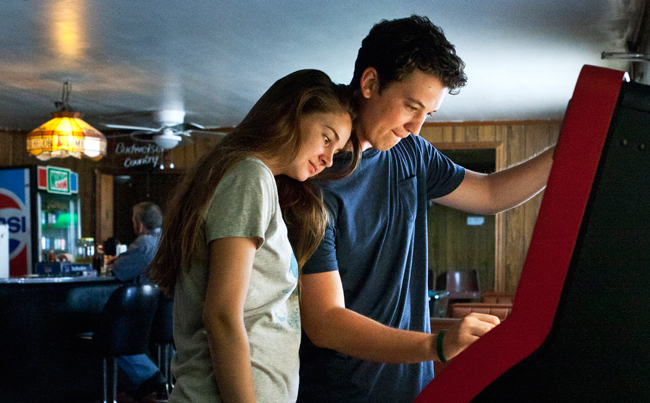 Teller plays Sutter Keely, an impulse-driven teen who’s in the first stages of an intense post-dumping downward spiral when he wakes up on an unfamiliar lawn with Aimee (Shailene Woodley) standing over him. Photo courtesy of A 24 Studios.

This year’s South By Southwest boasted such an impressive line-up that Texan film critic Alex Williams saw 30 movies during the nine days of the festival and still managed to miss plenty of notable films. These are short reviews of his favorite films of the festival, written between watching films, eating BBQ and getting very little sleep.

THE SPECTACULAR NOW (In theaters this August)

Miles Teller and Shailene Woodley cement their status as two of the most promising young actors working today in “The Spectacular Now,” a profoundly affecting teen romance and, for my money, the best film of SXSW. The gorgeously observed screenplay from “500 Days of Summer” scribes Scott Neustadter and Michael Weber casts Teller and Woodley’s characters as lovestruck teens who influence each other in ways both beneficial and toxic, and their relationship is powerfully defined and unflinchingly honest. “The Spectacular Now” connects on a raw emotional level, and the strength of this story and these performances should not be underestimated.

The winner of Grand Jury and Audience Awards at SXSW, “Short Term 12” stars Brie Larson as Grace, a supervisor at a home for kids at risk. Grace’s life is thrown into turmoil as a perfect storm of circumstances involving her boyfriend (John Gallagher Jr.) and a new arrival at the home (Kaitlyn Dever) forces her to confront some dark truths about her past. Larson’s performance is intense, and she portrays Grace’s commitment to her job with a natural toughness and compassion. “Short Term 12” is at its best when it takes extended looks into the heads of the facility’s tenants. The way these damaged teens express themselves manifests into beautiful, poignant moments, and the detailed character work, nuanced script and strong performances made the film stand out in this year’s formidable line-up.

YOU’RE NEXT (In theaters August 23)

“You’re Next” played at Toronto Film Festival and Fantastic Fest in 2011 before disappearing from the face of the earth, and it resurfaced to remarkable audience acclaim at SXSW. The hugely entertaining horror-comedy places a family at each other’s throats before unknown intruders start shooting crossbows through windows, and it only gets more nuts from there. Sharni Vinson gives a steely, surprising performance as an unlucky significant other trapped in the onslaught, and director Adam
Wingard displays a sharp, twisted sense of humor. If the film’s reception at SXSW is any indicator, this one will be thrilling midnight crowds for years to come.

One of the only films at the festival to be screened in 35mm, “Mud” is also one of the most visually stunning, and director Jeff Nichols captures the Mississippi River with elegant, immersive imagery. On a remote bank of the river, young boys Ellis (Tye Sheridan) and Neckbone (Jacob Lofland) stumble upon a fugitive (Matthew McConaughey). The bond they form is a hesitant but essential one, and Nichols lets “Mud”’s story unfold at a natural, impeccably structured pace, packing the film with earnest, hopeful and exciting moments. In just three films, Nichols has mastered telling stories about Southern masculinity, and “Mud” is his most rewarding effort to date.

A Baskin Robbins of horror cinema, “V/H/S/2” is a rare anthology without a bum segment and a strong second installment in the budding horror franchise. Shorts from Adam Wingard, Simon Barrett, Jason Eisener and Eduardo Sanchez bring creativity and chills, but they all pale in comparison to a short directed by The Raid’s Gareth Evans. The tale of a documentary crew invited into a secretive cult’s compound escalates into a spine-tingling assault on the audience, a deeply unnerving variety pack of terrors that’s a surefire contender for the horror hall of fame.

The undeniable breakout genre hit of SXSW was Audience Award winner “Cheap Thrills,” a scathing attack on free-market capitalism taken to its darkest extremes. A night of drowning his sorrows turns nefarious for Craig (Pat Healy) when he stumbles into an old friend (Ethan Embry) and an unusual married couple (David Koechner & Sara Paxton). The rest of the night becomes a spiral into debauchery, an unabashedly twisted and darkly hilarious satire that ends on an ironic, spectacularly appropriate final note.

MUCH ADO ABOUT NOTHING (In theatres this summer)

Joss Whedon’s modern take on Shakespeare’s classic comedy of manners is a low-stakes charmer and faithful adaptation that still manages to surprise. Whedon takes tangible delight in exploring the nooks and crannies of Shakespeare’s text, and his characteristic love of wordplay has clearly worn off on his ruthlessly funny cast. From Alexis Denisof’s grizzly conviction and Clark Gregg’s boozy charm to Fran Kranz’s surprisingly dashing performance, “Much Ado About Nothing” is a delightful match of material, director, no comma and performers.

“Evil Dead” played on the opening night of the festival to a packed house at the Paramount, and the world premiere of the highly anticipated horror remake was an exhilarating experience. Even when the film veers into “greatest hits” territory, it builds a visceral momentum as it goes on, escalating into a gleefully insane final sequence. Even if “Evil Dead” can’t top its predecessor in terms of scares, it ups the gore quotient to such preposterous heights that it manages to convey a blood-soaked charm.

Neil LaBute usually holds a magnifying glass up to the ugliest of human behaviors in his writing, and “Some Girl(s),” the story of a man (Adam Brody) jetting around the country attempting to clear the air with a variety pack of ex-girlfriends, is no exception. Each conversation peels back another layer of Brody’s psyche, and the film’s ensemble is more than game to psychoanalyze each other’s characters. Kristen Bell’s sharp wit, Zoe Kazan’s adorable fragility and Brody’s unshakable charm bring LaBute’s script to life with stark intelligence, and “Some Girl(s)” is a spectacularly acted depiction of a misguided trip down memory lane.

Joe Swanberg’s films have been like nails on a chalkboard at previous film festivals, but “Drinking Buddies” manages to be a refreshing change of pace for the director. The film is a mature exploration of romance and jealousy bolstered by a revelatory performance from Olivia Wilde. Wilde plays an employee at a microbrewery, and her close relationship with co-worker Jake Johnson barely fazes their respective significant others (Ron Livingston and Anna Kendrick). Kendrick is charming, while Johnson hits dramatic scenes out of the park, but it’s Wilde’s unpretentious, tender performance that sells the film. It turns out all Swanberg needed was actors looking for a challenge, and the resulting film may not be wholly satisfying, but it’s still a funny, insightful look at relationships under pressure.