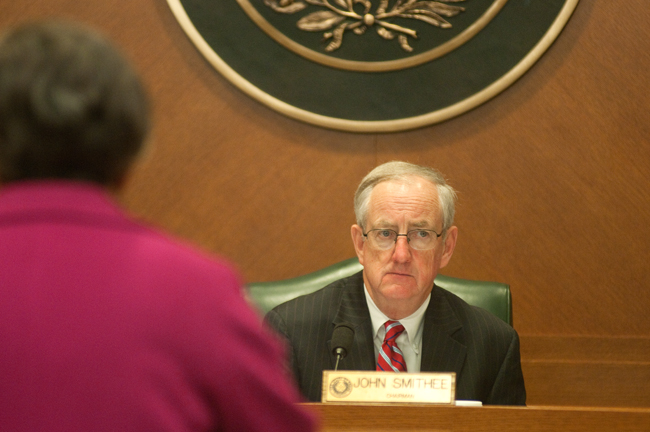 Representative John Smithee listens to a testimony at a hearing Tuesday afternoon at the Capitol.

A bill in the Texas Legislature would change the state insurance code to allow plus-one dependents of UT faculty and staff — including same-sex partners — to qualify for benefits.

The House Committee on Insurance heard testimony from proponents of plus-one benefits, which would allow the UT and Texas A&M University systems to extend benefits to “certain qualified individuals.”

Rep. Elliott Naishtat, D-Austin, filed the bill and said it would be up to the individual systems to define who would qualify.

The McCombs School of Business lost its top management candidate to Duke University because it was unable to offer benefits to the candidate’s partner, said Karen Landolt, director of the HireTexas interview center at the School of Undergraduate Studies. Landolt said incidents like this have happened multiple times at the University and each time reopening the search for faculty costs the University $6,000.

Landolt said because of the absence of plus-one benefits, fewer faculty members with same-sex partners are recruited to UT and this isolates LGBT students because they have fewer staff members they can relate to.

Committee chairman Rep. John Smithee, R-Amarillo, said he is concerned about lowering the bar for the selection of people covered by insurance.

Landolt said the bill would not necessarily apply to only same-sex partners because the UT System Board of Regents could broaden the definition.

The UT Faculty Council passed a resolution Monday encouraging the regents to work with the legislature and ultimately institute domestic-partner benefits for UT employees.

The insurance code of the UT and A&M systems states that these schools must be competitive with private industry, and the education code requires these institutions be competitive with other higher education institutions, said Chuck Smith, executive director of Equality Texas, an organization that lobbies the state on LGBT issues. Smith said because UT and A&M do not offer plus-one benefits, they are not in compliance with these codes.

“This is ultimately all about competition,” Smith said. “Enabling this legislation, advancing this legislation would allow our two flagship institutions to be what they were intended to be, and that is leaders not only in the state but leaders across the country.”

Published on March 20, 2013 as "Bill would extend partner benefits".