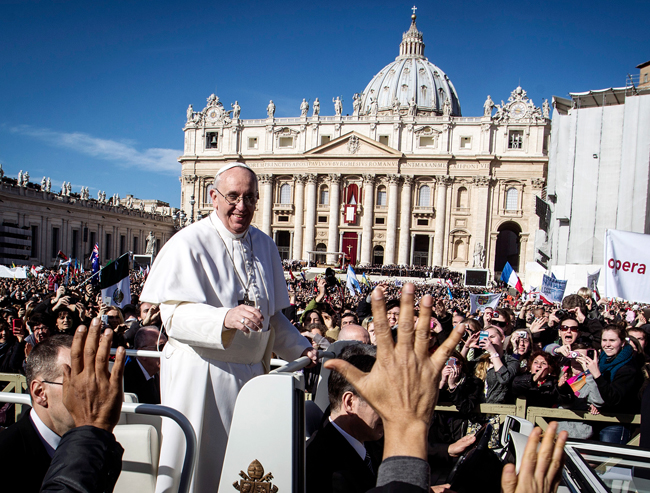 Pope Francis is driven through the crowd in his popemobile in St. Peter’s Square for his inauguration Mass at the Vatican, Tuesday, March 19, 2013.  " />

Pope Francis is driven through the crowd in his popemobile in St. Peter’s Square for his inauguration Mass at the Vatican, Tuesday, March 19, 2013.

During the conclave to select a new leader of the Roman Catholic Church, several UT students joined crowds of tourists at the Vatican hoping to snap a picture or grab a souvenir to commemorate the event.

Cardinal Jorge Bergoglio from Argentina was selected as the new pope of the Catholic Church on March 13, taking the name Francis. He is the first Jesuit priest to be named pope and replaces Pope Benedict XVI, who resigned from the position in February.

Social work sophomore Emma Thompson, who was raised Catholic, was visiting Italy for spring break at the time of the conclave.

“Being at the Vatican during conclave is a once-in-a-lifetime opportunity,” Thompson said.

Thompson said she is optimistic that Pope Francis will be able to inspire Catholics.

“I hope that he is an engaging leader who can unite the diversity and huge numbers that are in the Catholic Church,” Thompson said.

History sophomore Julianne Staine, who joined Thompson, said there were large crowds of visitors throughout the conclave during the historic event.

“The atmosphere in Rome was pretty crazy,” Staine said. “When we got to the Vatican the media presence was insane. There were hundreds of cameras and photographers and newscasters, and it added considerably to the excitement of the whole thing.”

Religious studies and history professor Virginia Garrard-Burnett said since there have not been any non-European popes in modern times, selecting Francis from Argentina will be a significant change for the church.

“The selection of a Latin American pope is an acknowledgement of the fact that the center of gravity has shifted for the Roman Catholic Church from Europe to the developing world,” Garrard-Burnett said. “The Catholic Church remains very strong in Latin America and Africa, but it is no longer strong in Europe, where people tend to be very secular these days.”

Garrard-Burnett said the Catholic Church has been losing members in Latin America over the past three decades to evangelical Protestantism, and naming a Latin American pontiff may help to slow the movement of Latin Americans leaving the church.

Francis’ new role will not only affect Latin American Catholics but will also have a global impact, according to Garrard-Burnett.

“The selection of any new pope impacts Catholics in every part of the world,” Garrard-Burnett said. “Pope Francis does not seem to differ from the previous pope on social [and] church issues such as abortion, gay marriage, priestly celibacy or the ordination of women. That probably will not change. However, he is deeply interested in the interests of the poor and he’s made that clear already. That’s a departure from the Pope Benedict.”

Journalism sophomore Claire Hogan, who traveled with Thompson, said although she is not Catholic she could see the impact the conclave had on those in the Vatican.

“When we ventured to St. Peter’s [Basilica], it was almost overwhelming how much excitement there was on the matter,” Hogan said. “People had traveled from all different parts of Europe and the world to witness this piece of religious and cultural history.”

Published on March 20, 2013 as "UT students experience Vatican during conclave".