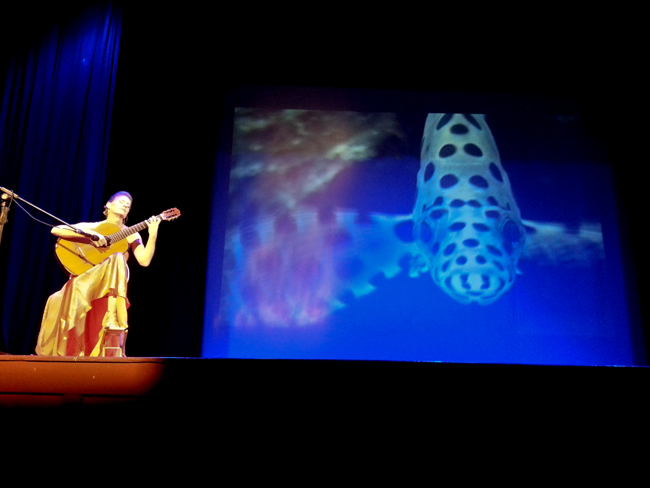 Susan McDonald will be performing “The Aquarium: a Marine Micro-Ballet for Guitar and Sea Creatures” at the Cactus Cafe on March 21. (Photo courtesy of Susan McDonald)

Susan McDonald is a Texas born-and-raised classical guitarist that has been playing since she was six. The Daily Texan sat down with her to discuss her upcoming program “The Aquarium: a Marine Micro-Ballet for Guitar and Sea Creatures” and what performing really means to her.

The Daily Texan: You’ve released 10 albums that have such a wide range of themes, from cooking to the epic of “Gilgamesh”. Where do you find inspiration for your works?

Susan McDonald: For the last 10 years or so, things have shifted very much in me. In the beginning, I was very much a serious concert artist and I still am of course but I was doing very hardcore classical programs and Carnegie Hall and all that, but then quite a few years ago my father got sick with cancer…I took time off from touring to be with him and spent a lot of time at the cancer hospital and got into composing myself and came up with such a realization of how much more the guitar could do than just be a concert instrument.

DT: Has your audience been able to make connections between the more serious themes of your music?

McDonald: Absolutely…"Comfort" was the changing point in my career. The pieces from "Comfort," I have found, are pieces I can play for audiences that don’t speak English or I don’t speak their language and I can play those pieces and they will cry…the moment I would have to say that changed my life was when my dad was in the hospital at MD Anderson and so all the time that I was spending practicing ended up being in the middle of the night, in the deserted hallways or around gardens where people would come out and they would be hooked up to IVs.

DT: Where did the idea for your animal ballets come about?

McDonald: I was actually on my way to go on tour with a really serious classical program and in the meantime, my husband and I had been given this giant saltwater aquarium and there weren’t even fish in it at the moment, but with live rock, there are all kinds of little things living in there, it’s very “Horton Hears a Who” and so I was sitting there, needing to be practicing Bach and I looked over and in the sand this eyeball popped up out of the sand and it looked like the eyeball of a Martian, it was on a long stem and it was blue and it was really weird.

And then another one came up from the sand. And then a giant flat tongue came through the sand. It was a conch and it had been on the live rock. Immediately a melody presented itself to me, just this silly, quirky little melody that would go perfectly with this weird little tiny creature. So that gave me the idea that if I could get somebody to film this, I could write music that would go with it and I could teach kids about the environment, about sea creatures, you know, wouldn’t that be cool?

DT: Does this translate positively from children to the college crowd and adults in general?

McDonald: As adults and college students, we tend to get into this deal where we’re a little bit jaded. We require more and more and bigger and bigger to be impressed so I think that we have a tendency to lose sight of being a child and how delighted and cool kids think things are. But what I love about this — with sea creatures, with any animal — is that at any age, if the creature is cool enough, you’re going to have that same reaction that you would have if you were a kid. All the surface stuff goes away and you’re just delighted…all of the jaded feelings that we have as adults will get swept away.