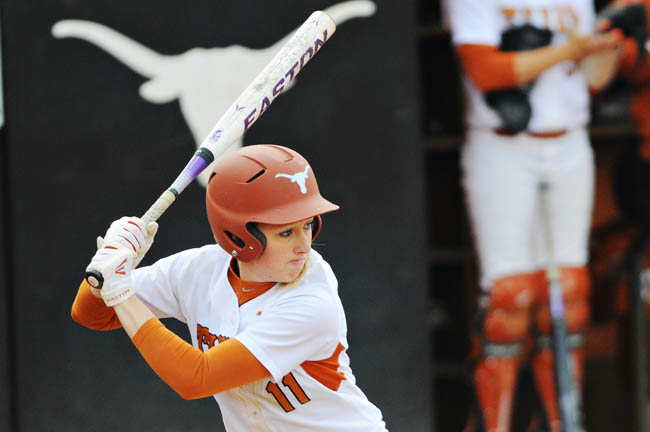 Junior Taylor Thom bats against Louisiana-Lafayette. Thom has proven to be the Longhorns' most consistent all-around player.

When junior shortstop Taylor Thom steps on the field, teammates and fans alike know what to expect: consistency.

She gives No. 9 Texas consistent effort at shortstop, consistently strong at-bats that total 31 runs and 38 RBIs so far this season, and a fairly consistent long ball that has accounted for 18 extra-base hits. But Thom’s consistency goes beyond her play to her attitude. Amidst the swishing blonde ponytail and piercing blue eyes, Thom consistently displays a smile and character that motivate her teammates.

“It’s great to see her playing so confidently,” third baseman Taylor Hoagland said of Thom. “We want to be big and let nothing by us. And then at the plate, I can always ask [Thom] what she is seeing or what I should watch for.”

After a strong freshman season which showed Thom’s potential, her sophomore year proved less satisfying. Thom found herself distracted, dropping her batting average nearly six points, bringing in just over half as many runs as her first season and nearly losing her home run reputation.

But come off-season, Thom didn’t fold. She used her 2012 results to fuel a fiery return.

“As freshmen, nobody has a scouting report and they go crazy,” head coach Connie Clark said. “As a sophomore, scouting reports are out and there are some frustrations that set in at times — we just try to work through those. By the time they’re juniors, they understand the big-picture view of the game and how to respect that. Now [Taylor Thom] has that freedom and looks amazing. To me, to be honest, she looks like a junior.”

Thirty-one games into the season, Thom’s experiences shows. She boasts the fourth best batting average on the team at .392. With a .763 slugging percentage, Thom’s long balls have tied two NCAA records this season: a single-game record of three doubles, versus Utah State on Feb. 23, and two grand slams at Houston in an eight-RBI performance Feb. 16.

“An NCAA record is a crazy feeling and it’s truly an honor to be among some of the top players,” Thom said. “I wasn’t really thinking at the time ‘Oh, I’m going to tie this NCAA record,’ but afterwards, it was a surreal feeling.”

Texas opens conference play against Baylor this weekend, with games both at home and on the road. Last May, Thom connected on a hit and a sacrafice bunt when the Longhorns trumped the Bears 3-1 to close out conference play in 2012. Baylor returns both pitchers from that game and Thom feels she and the team are ready.

“I’ve faced these pitchers multiple times so I know what’s coming and then I have the confidence that I can hit this and I’m a good batter,” Thom said. “We’re all very tight this year and tough mentally. Now we’re focused on getting that NCAA national championship.”

As she looks at her remaining season and a half on the 40 Acres, Thom already knows her goal. She’s found her family, made her friends and played alongside sisters. But she doesn’t want that to be it when she graduates.

“I want to leave here and people remember my name, to say ‘I want to work as hard as Taylor Thom.’ I just want people to remember me.”