“Spring Breakers” shows the dark side of your favorite holiday 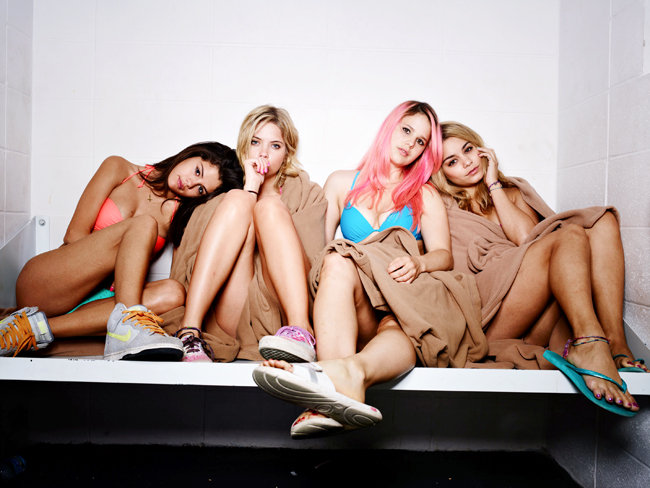 This film image released by A24 Films shows, from left, Selena Gomez, Ashley Benson, Rachel Korine and Vanessa Hudgens in a scene from “Spring Breakers.” " />

This film image released by A24 Films shows, from left, Selena Gomez, Ashley Benson, Rachel Korine and Vanessa Hudgens in a scene from “Spring Breakers.”

Harmony Korine’s “Spring Breakers” doesn’t seem to have much on its mind as the credits unfurl over a barrage of beer bongs, bare breasts and bad behavior, and on the surface, “Spring Breakers” is nothing more than an excuse to get some of the most popular Nickelodeon and Disney stars into very compromising situations on camera. However, once you start to peel back the layers of the film’s neon-drenched aesthetic, “Spring Breakers” becomes a coyly disguised film about, among other things, responsibility, living a rewarding life and the corruptive power of Britney Spears.

Selena Gomez, Ashley Benson, Vanessa Hudgens and Rachel Korine star as a quartet of underfunded college students who, desperate for an escape to the beach, rob a restaurant to bankroll their dream spring break. A few keg stands later, they end up in handcuffs, and their unlikely savior is drug dealer/rapper/self-described gangster Alien (James Franco).

Anyone in search of a meaningful narrative arc will be disappointed by “Spring Breakers,” and the film isn’t exactly interested in telling a story. It’s a film about a lifestyle, not characters, and almost every moment in the film is dedicated to exposing the dark underbelly of the YOLO philosophy. Even as the film’s neon aesthetic and dupstep-driven momentum seem to revel in the beachside debauchery, it’s clear that Harmony Korine is interested in exploring the mind-set of the modern American youth, holding a mirror up to our ugliest behavior accusingly.

All of that sounds a bit like a 40-year-old director telling a bunch of bikini-clad teens to get off his lawn, but there’s no denying that “Spring Breakers” is an absolute blast to watch. There’s not a wasted moment in the film, and the woozy spring break plays like a half-formed memory at times, with a disorienting, arresting lilt to the rhythms of its dialogue, driven by Cliff Martinez and Skrillex’s seductive score. Korine stages several bravura sequences, especially the creatively filmed and thematically loaded robbery that kicks off the film, a bizarre montage set to a crooning Britney Spears song, and an unusually constructed but satisfyingly climactic shootout.

“Spring Breakers” is building a good bit of its appeal around its youthful cast, but Korine didn’t cast his titular characters because they were willing to tarnish their (mostly) squeaky-clean images. Selena Gomez is surprisingly effectively as Faith, the “good girl,” and Gomez’s bright-eyed and bushy-tailed innocence strikes an essential contrast to the rest of the cast. Ashley Benson and Rachel Korine are both solid in their roles, but Vanessa Hudgens tears into her character with surprising fierceness, determined not to cast off her image but to shatter it into a million pieces.

Hudgens’ performance kicks into high gear once James Franco’s character enters the picture, and his totally gonzo performance fits Korine’s style perfectly. Alien is a character who solves his problems by throwing bills at them, and Franco's essentially playing Korine’s thesis statement, a life lived with no responsibilities taken to its most natural extreme.

For a film with so much potential for inciting moral outrage, “Spring Breakers” is actually a fascinatingly purposeful film from Harmony Korine. The film is a thoroughly modern bait-and-switch, blinding the audience with a barrage of colors and bass drops, leading them to believe that the film is a gleeful celebration when it’s actually a damning condemnation.