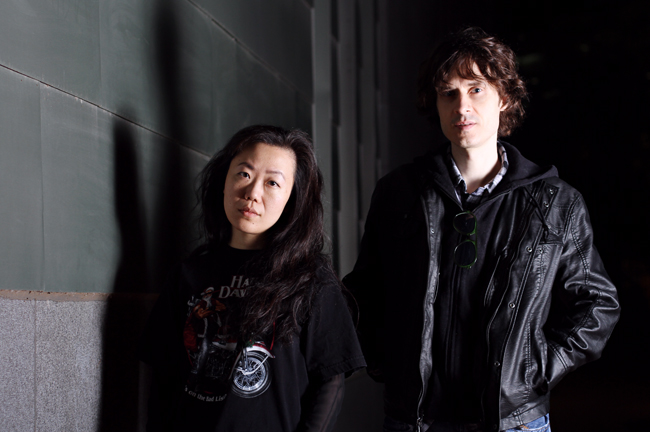 Houfei Yang and Greg Thuman are the members of Primal Static, a duo that fuses electric, rock and blues. Their diverse backgrounds - Yang, a classically trained pianist and Thuman, a self-taught guitarist - produce an eclectic sound that can be heard at Local Live on Sunday.

The story behind Primal Static is just like the story behind the film “Step Up,” minus Channing Tatum and all of the overdramatic dance scenes. The band’s two members, Houfei Yang and Greg “2Man” Thuman, come from completely opposite musical backgrounds and somehow came together to form a band capable of creating semi-cohesive tunes.

Yang, originally from China, began playing the piano at age four. She moved to the U.S. to attend UT on a piano scholarship before moving to Baltimore to attend the Peabody Conservatory for graduate school.

“I was brought up to be a professional pianist so I was used to practicing four or five hours a day,” Yang said.

On the other hand, Thuman was born and raised in Annapolis, Md., where he spent most of his time writing songs and teaching himself to play the guitar.

“I typically wanted to shy away from school as much as possible,” Thuman said. “I’m a totally different person from Houfei.”

Thuman and Yang met while Yang was living in Baltimore. Thuman posted fliers advertising auditions for a band he wanted to start, and Yang responded to the call.

“I called to see what was up and he didn’t answer the phone, so I left a voicemail,” Yang said. “It wasn’t anybody talking, it was just a guitar solo. It was so stunning I couldn’t even talk. I didn’t expect that. I was calling someone I didn’t know.”

Thuman was impressed not only by Yang’s esteemed piano playing, but also by her willingness to try new things.

“She was totally conservatory trained. I had to help her out of that straitjacket,” Thuman said. “But she wants to see places and broaden her boundaries. She has that sort of discipline that someone has with the piano and also a sense of adventure.”

Before joining Primal Static, all of Yang’s performances involved playing rehearsed, classical pieces behind a piano. This is her first diversion from that atmosphere.

“I never ever really felt what it’s like to bring your original music in front of a live audience,” Yang said. “It’s a kind of edgy excitement to earn that applause.”

Thuman said Yang’s competitive background has helped tremendously when it comes to dealing with the cutthroat music industry.

“I think the most eye-opening thing to her has been the business,” Thuman said. “It’s been good for us because she used to do a lot of piano competitions, so she’s pretty tough. I think she’s been really strong.”

For now, the group is an unsigned, independent act. They plan on releasing a five-song EP, which was recorded all analog, at their performance for this Sunday’s “Local Live.”

“The music industry has been so different that I’m not sure a label is the way to go,” Thuman said.

Not only does Primal Static lack a label, but like many other bands, it also lacks a specific genre. While Thuman describes the sound as street music, the songs range from something that resembles the style of ‘90s post-grunge band Live to the bluesy rock tones that can be found in Japanese-American singer-songwriter Olivia Lufkin’s “A Little Pain.”

The band’s self-described eclectic sound could very well be a result of the strange collaboration that is Primal Static. Despite their extremely different backgrounds, Yang and Thuman become more cohesive with every rehearsal and performance.

“I like Bach and things like that, but I’m a rocker, no doubt,” Thuman said. “Us learning from each other has been mutually complementary. It grew over time as we grew tighter as a group.”

Thuman said the band’s onstage performance relies heavily on the energy of the audience. The two feed off each other and the reaction the audience has to their music.

“If the audience is really into what you’re doing, you can go anywhere,” Yang said.

According to Thuman, the band has self-funded most of its projects and recording thus far. He said for now, money is not what matters most.

“Through the years we’ve been doing this, I’ve realized the thing that matters most is the people,” Yang said. “It’s about the music and the people that this music means something to.”