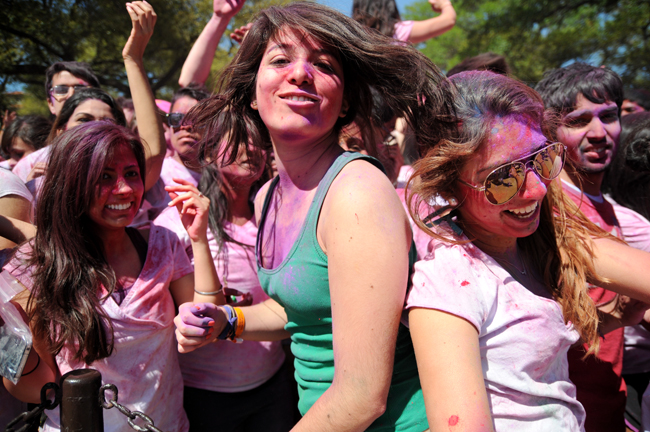 People enjoy the festival of colors “Holi” at South Mall on a Sunday afternoon. The event involved around 6000 students and was organized by the the Hindu Students Association to celebrate the Indian holiday.

The South Mall was soaked with dyes and water Sunday, as students partook in the Hindu Students Association’s tenth Holi event.

The event was intended to celebrate cultural diversity and to parallel the Indian holiday, also known as the Festival of Colors or the “spring festival.”

“In India, this is a big deal,” HSA CEO and President Swati Verma said. “This is the beginning of the farming season.”

Verma said she hopes the event connects UT students with another culture and symbolically celebrates differences in color.

Sneha Gurajala, co-chair of the Holi event, said the event helps celebrate Indian culture. She said HSA members worked the lines and handed out shirts to people who knew what Holi was, and all promotional material had information.

“We put a lot of emphasis on this not just being a color dance party,” Gurajala said.

The event, which ran from 1-4 p.m., involved approximately 6,000 students. To provide these students with the dyes and water balloons they threw at each other throughout the festival, HSA ordered ten 55-pound bags of dye and handed out more than 1,000 water balloons at intervals throughout the event. The event also drew on the musical talent of “DJ Chet.”

Cary Kuo, an electrical engineering freshman, said he went to the event because it served as a nice break from his heavy workload.

“I thought I’d take some time off from the life of a ‘double E,’” he said. “It seemed like a creative and cool event.”