A proven winner, Vince Young deserves a second chance in the NFL 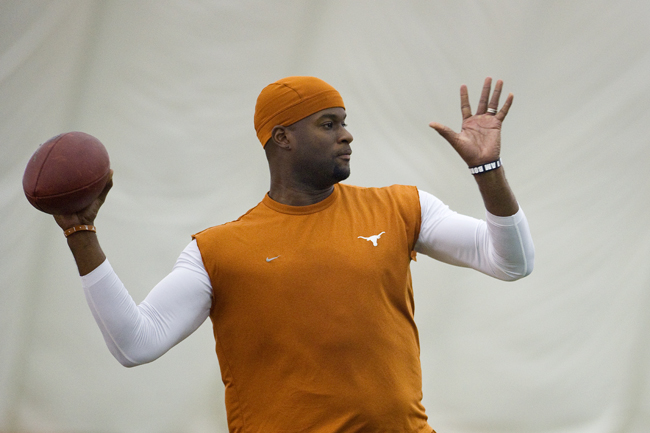 Former Texas quarterback Vince Young worked out at this year’s Pro Day in hopes of earning a spot on an NFL roster.

How could a quarterback who’s won 62 percent of his starts, played twice in the Pro Bowl and been named Rookie of the Year not earn a place in the NFL?

Since leading the Longhorns to a national title in 2005, Vince Young went 31-19 as a starter in the NFL, led seven fourth-quarter comebacks and racked up more than 10,000 yards of offense.

After stints in Tennessee, Philadelphia, Pa. and Buffalo, N.Y., however, Young found himself without a job. His financial woes became public. But the same guy who threw his jersey in the stands, called the Eagles a “dream team” and was released by the Bills last August wants back in the NFL.

“You can’t hold that against him,” former Texas safety Michael Griffin, Young’s teammate in college and the NFL, said. “He’s a great football player. It’s not like he hurt anybody or anything. You see players in the league that have done crazy things that still get opportunities.”

There are always teams looking for help under center in the NFL. If they know what’s good for them, they’ll take a long, hard look at Young.

The former Longhorns star and No. 3 overall pick completed 40 of 44 passes at Texas’ Pro Day on Tuesday, two of which were dropped and another two of which were overthrown. He appeared to be in great shape and seemed to be the same, loose, carefree guy that took down USC eight years ago.

“Teams have been quiet,” Young’s agent, Jerry Marlatt, said. “We should be hearing more from them between now and May 1. Between April and May, that’s when things usually pick up … He’s been working really hard.”

Young’s physical tools are there. And with guys like Robert Griffin III, Russell Wilson and Colin Kaepernick making the zone-read, which Young perfected while at Texas, more popular in the NFL, Young’s chances of getting back in the league are given a much-needed boost.

“It makes all the difference in the world,” Brown said. “Here’s a guy that made a living with the zone-read, play-action pass, boots and nakeds and all the things that a Russell Wilson or a RG3 or a Kaepernick or luck does. I thought he came out a little ahead of his offense and now his offense is catching up.”

When Young first entered the NFL, quarterbacks that could throw and run weren’t trusted as much as they are now. But none of that matters.

Because there’s one thing that NFL teams care about more than anything, one thing Young’s always been able to do — he can win.